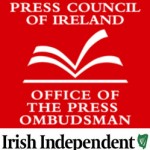 A vindication for the Palestinian-led Boycott, Divestment and Sanctions movement (BDS), and particularly the Ireland-Palestine Solidarity Campaign (IPSC) as the Press Ombudsman rules that a hatchet job piece by the Irish Independent‘s Ian O’Doherty was “factually inaccurate” in relation to two slurs on the movement.

The complaint was made to the Ombudsman’s office by journalism lecturer Harry Browne, who is also a founder member of Academics for Palestine, a group of scholars that advocates an academic boycott of Israeli institutions.

In a column on 24th June, Mr. O’Doherty  described the BDS movement as being “loud and shrill in their calls for a complete boycott of individual Israelis, regardless of their own political affiliation” and advocating “blanket boycotts of anything involving Jews.” There were falsehoods, and the Ombudsman stated that “the article was factually inaccurate in relation to the two statements”.

In fact, as the Press Ombudsman correctly points out in his ruling:

These were not the only inaccuracies, half-truths and outright falsehoods in the piece by Mr. O’Doherty – which you can subject yourself to here should you have a masochistic streak. For the full context to article, please also read these two pieces:

* IPSC Statement on the cancellation of the Israeli Feis: A victory for Palestinian rights marred by disgusting and defamatory comments

* Lies, Damned Lies and the Mainstream Media: The curious case of the cancellation of the Israeli Feis

Nor is this the only time this particular pundit has used his position of privilege in a national newspaper to undermine the struggle for Palestinian rights and freedoms, and applaud the actions of apartheid Israel.

In previous articles, Mr. O’Doherty has referred to the nine participants on the Gaza Freedom Flotilla killed by Israeli commandos as being “murderous fanatics,” and has incorrectly claimed that “hatred that characterises every single aspect of Palestinian life, from school books to television shows, which glory in the murder of Jews.”

He has also denied that collective punishment – which of course is illegal under international law – is Israeli policy when it comes to Palestinians, especially those in Gaza, gone so far as to praise Israel for “acting with a ridiculous degree of restraint” during Operation Cast Lead. During this assault on Gaza, Israeli occupation forces killed over 1,400 Palestinians, around 900 of them civilians including  over 300 children in 23 days, and left vast carnage – including the destruction of over 4,000 homes, civilian infrastructure and other damage, in total amounting to around $2 billion’s worth of damage – behind them.

Here is the judgement from the Press Ombudsman in full: