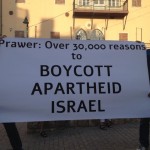 “The Ireland-Palestine Solidarity Campaign (IPSC) strongly condemns the Israeli ‘Prawer Plan’, which will dispossess and expel the indigenous Palestinian Bedouin inhabitants of the Naqab (Negev) Desert and resettle the area with Jewish residents, in the state’s biggest act of ethnic cleansing since 1967,” IPSC Chairperson Matrin O’Quigley said today, calling it “a racist act, pure and simple”.

Under the current regime almost half the Bedouin population of the Naqab (40,000 people) live in 35 villages on ancestral land that constitutes less than 5% of the total area. The majority of these villages pre-date the establishment of the Israeli state, yet Israel refers to them as ‘unrecognised villages’. As the inhabitants are non-Jewish citizens, the state has chosen to treat them as ‘illegal communities’, denying them essential rights and services such as connection to the electric, water and transport networks, and refusing to provide medical, postal and educational services. Israel treats construction within these villages as illegal and regularly demolishes the homes of the residents. The Israelis have demolished the village of Al-Arakib more than fifty times.

Despite opposition from Bedouin leaders, along with Israeli and international civil and human rights groups, the Prawer Plan has been endorsed by the Israeli Prime Minister’s Office and will shortly go forward for legislation in the Knesset.

Mr O’Quigley explained that “in support of the Palestinian Bedouin the IPSC calls for an immediate halt to the Prawer Plan and recognition of the indigenous rights of the Bedouin as equal citizens of Israel. In particular the IPSC condemns the unequal treatment of Palestinian and other non-Jewish communities within the State and emphasises that since 1948 the State of Israel has established approximately 600 Jewish municipalities, whereas not a single new Arab village, town or city has been built”.

“The IPSC further condemns the pejorative characterisation within Israel of the Bedouin as ‘invaders’, ‘nomads’, ‘fifth columnists’, or a ‘demographic threat’. In particular the IPSC deplores the racist sentiments expressed by former Deputy Prime Minister Lieberman who referred to development in the Naqab (Negev) as a battle for a Jewish Negev, and Prime Minister Netanyahu who has expressed his satisfaction at a fall in the non-Jewish birth-rate,” Mr O’Quigley continued.

In light of this Plan and the sentiments behind it, Mr O’Quigley asked “How is it possible that thousands of families will be forcibly evicted from their homes, having their livelihoods destroyed by a state in breach of so many international laws, while, the recent diplomatic flap over funding guidelines excluding illegal settlements notwithstanding, the EU continues to deepen its trade and economic ties with Israel? How is it possible that the Irish government sees Israel as a legitimate partner for state-sponsored cooperation? All such cooperation should cease until Israel ends it occupation of Palestinian lands, grants equal rights to its Palestinian and other non-Jewish citizens, and fulfils its obligations under international law.”

1. The full text of the plan can be read online at http://www.scribd.com/doc/154461816/The-full-translated-text-of-Israel-s-Prawer-Plan.