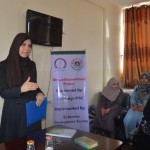 In the aftermath of destructive military onslaught on Gaza by Israeli forces which cost the lives of over 2,000 Palestinians in 2014, Portadown IPSC made contact with community workers in Khan Younis to establish a means of providing material assistance to those most affected by the conflict.

A proposal was received back from Gaza in relation to a potential project which sought to provide direct assistance to women in those families where the main bread-winner was either killed or seriously injured as a result of the Israeli bombardment.

That initiative envisaged providing training and employment opportunities for women by creating a small, co-operatively-based food-processing unit where various baked foods, jams, etc., could be produced thereby empowering some of those most affected by the conflict and, at the same time, providing them with a source of income.

The massive destruction which Israeli forces wreaked upon the Khan Younis area, coupled with the interference which the Portadown IPSC experienced in sending funds to Gaza as a result of Israel’s ongoing economic blockade, hindered the commencement of the women’s project for many months.

At the end of last year, a progress report was provided to Portadown IPSC by the El-Baraem Development Society detailing several public meetings held in Khan Younis to inform local women about the project.

Over 100 women had expressed firm interest in the project and sixty of those, aged between 25 and 45, were formally recruited. However, commencement of the training programme was further delayed while suitable premises were identified.

In their latest project update to Portadown IPSC this month, the El-Baraem Development Society reported that the full training programme has now been underway from the beginning of July and will continue through until the end of December.

A total of sixty women are now participating in this six months-long training programme.

Additionally, equipment for the project was also purchased, such as electric blenders and food mixers, meat grinder, a gas cooking oven and an electric cooking oven, a full range of kitchenware and cooking utensils, tables and chairs.

The next target which El -Baraem Development Society has set is to try an ensure that their vision of a food production unit, providing much needed employment for some families in poverty-stricken Gaza, finally comes to fruition.

It’s good to see that this project is progressing in spite of Israeli’s economic blockade and ongoing attacks on Gaza.

Portadown ‘adopted’ the women’s empowerment project locally as a means by which people in Portadown and surrounding areas could provide some form of positive and long-lasting aid to the Palestinian people.

Since 2014, Portadown IPSC has raised several thousand pounds to help this initiative get off the ground. Local people have been fantastic in their response. It speaks volumes about the generosity of people within the local community and the strength of their solidarity and empathy with the plight of the Palestinian people.

The aims of the Ireland Palestine Solidarity Campaign are to raise awareness in Ireland of the illegal occupation of Palestinian land, the plight of Palestinian refugees and the struggle of Palestinian citizens for full equality and civil rights. Those aims also include fostering links between the Palestinian and Irish people in the areas of health, education, culture, workers’ rights, the economy, and the promotion of human and civil rights.

The support which Portadown IPSC has provided for the El-Baraem Women’s Empowerment Project is an example of one way of translating those aims into positive and affirmative actions.