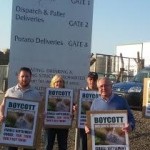 IPSC members and supporters in Portadown handed in a formal letter of protest on Thursday evening (May 12th) to the main production plant of Wilson’s Country, based at Carn industrial estate on the outskirts of the town, objecting to the company’s decision to recommence the importation of Israeli produce.

A short protest was held at the main entrance of the firm and placards urging the boycott of Israeli produce were erected along the perimeter fence of the six acre site.

The protest is part of wider Ireland Palestine Solidarity Campaign (IPSC) efforts aimed at businesses which trade directly with Israel.

The Portadown protest follows recent revelations that Wilson’s had recommenced importing Israeli potatoes and are supplying them to shops and supermarkets including Tesco’s. Last July, Wilson’s Country which has a multi-million pound annual turnover, publicly announced that they would cease importing Israeli produce. Wilson’s Country is one of the premier potato packers and processors in Ireland.

A spokesperson for the IPSC in Portadown, Ciarán Ó Feargháil, said, “Last year, when public revulsion of the Israeli state was still rife in the aftermath of the terrible military onslaught again Gaza, Wilsons publicly stated they would stop importing Israeli produce. Now, less than a year later, they have gone back on that position.”

Mr. Ó Feargháil added: “The profits from, and taxes imposed on, these imported goods help Israel to maintain and expand its illegal occupation of Palestinian lands. On top of this, often the potatoes are grown by illegal settlers using stolen Palestinian water – many precious West Bank water aquifers are under Israeli military control with Israel deciding who gets the water, and when. Israeli settlements in the West Bank never face water shortages while it is an all too common feature for Palestinians despite water coming from exactly the same sources.”

Mr. Ó Feargháil concluded, “In South Africa, an international boycott played a significant role in ending apartheid. We urge people of conscience to help defeat the brutal apartheid system that Israel is imposing on the Palestinians through the simple act of refusing to buy Israeli goods and boycotting those firms, such as Wilson’s Country, that trade with Israel.”