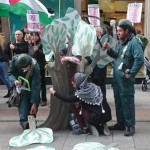 Members and supporters of the Ireland-Palestine Solidarity campaign brought the Boycott Israeli Goods message to shoppers and shops in Dublin on 7th March 2015 by visiting several city centre outlets that stock Israeli goods, making consumers aware of their presence, the connection between these products and the occupation of Palestine and asking people to boycott them.

As part of the day, outside each store the activists staged street theatre informing peopleabout the vast destruction of Palestinian olive trees under Israel’s apartheid occupation regime. Did you know that since the beginning of Israel’s military conquest of the West Bank and Gaza in 1967, Israeli occupation forces has uprooted or otherwise destroyed over 800,000 olive trees – the equivalent of over 1,000 times the number of trees in St. Stephen’s Green? Illegal Israeli settlers have also destroyed tens of thousands of trees and saplings.

Olive trees are a vital economic, cultural and social part of Palestinian life – as well as being a powerful symbol of resistance and steadfastness – and for this reason they are a favoured target of both the apartheid regime and it’s illegal settler auxiliaries.

You can download a copy of the leaflet about olive trees we handed out here. Israeli exports – from both the illegal settlements and inside Israel – contribute to the economy of Israel’s apartheid occupation regime and the oppression of the Palestinian people and the destruction of their economy. Indeed, the Israeli government is dependent on a strong export-orientated economy and Europe is Israel’s largest trading partner.