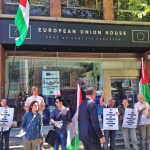 On June 8th 2014 the EU and Israel finally signed the Horizon 2020 association agreement which will allow Israel to be a party to the program that doles out research grants using EU taxpayer money. On Wednesday 18th June the Ireland-Palestine Solidarity Campaign (IPSC) held a symbolic lunchtime protest outside the EU Commission office in Dublin to highlight opposition to Israel’s accession to this agreement.

Any EU agreement with Israel should be opposed so long as Israel is an occupier of Palestinian lands and remains a serial human rights abuser and violator of international law. However, this agreement is particularly egregious as it will see Israeli companies and institutions, many of which are complicit in the occupation, become eligible for lucrative EU grants. In its previous incarnation as ‘FP7′, this agreement saw around €635 million in EU taxpayers money given to Israeli entities, including arms manufacturers and companies based in illegal colonial settlements. That Israel is allowed to rejoin the agreement is, in effect, a rewarding of Israel despite its obscene and illegal treatment of the Palestinian people over decades. This also reflects very badly on the EU and its human rights commitments.

Furthermore, it seems incredible that while this agreement in principle includes the new EU Guidelines that prevent any EU funding going to companies based in illegal Israeli settlements on Palestinian land, it contains an appendix “stating Israel does not recognise the new guidelines”. It seems inconceivable that such an exception would be made for any other state. The EU must stop singling out Israel for special treatment, and instead hold Israel to account for its ongoing crimes against the Palestinian people. At present, ostensibly in response to the disappearance (presumably by abduction) of three young Israeli settlers, the Israeli military is carrying out a large scale invasion of the West Bank, detaining hundreds of political opponents, including charity workers. Hebron has been hermetically sealed while Israeli occupation forces terrorise its inhabitants. Similar scenes have been seen in other West Bank towns and villages. At least four people have been killed, and many others wounded. Meanwhile the mass Palestinian hunger strike against Israel’s use of Administrative Detention has passed 60 days, and instead of addressing concerns over the use of this illegal method of detention (which Amnesty International has called for an end to), the Israeli state is pushing through legislation that will allow the force-feeding of fasting detainees, which itself is a form of torture and ill treatment.

At present and in the past the EU has sanctioned many countries. Yet, despite its constant violation of human rights norms, international law violations and commission of war crimes, Israel has remained immune to such action. The impunity granted to Israel ensures it will continue to act in this manner. This must end, the EU must take concrete action. Words of “concern” are not enough.