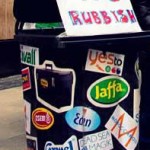 On Saturday 1st March, the Dublin branch of the Ireland-Palestine Solidarity Campaign kicked off Israeli Apartheid Week 2014 with a Boycott Israeli Goods day of action. We visited four city centre supermarkets, making consumers aware of their presence, the connection between these products and the occupation of Palestine and asking people to boycott them. We also handed in letters of protest to the management of each store, asking them to cease sticking Israeli goods.

Departing from Dublin’s Spire with our ‘Boycott Israeli Apartheid’ banner, and the ‘Dustin of History’ asking people to ‘Bin Apartheid, It’s Rubbish’, our first stop was Dunne Stores on Henry Street, to highlight that 2014 is the 20th anniversary of the famous Anti-Apartheid strike by members of IDATU who refused to handle goods from Apartheid South Africa. It is shameful that two decades on, Dunnes Stores would again allow itself to be on the wrong side of history, profiting from the products of another Apartheid regime. We then moved on to Marks & Spencer on Liffey Street, where Gearoid Kilgallen, a founder member and former chairperson of the Irish Anti-Apartheid Movement spoke about the importance of boycotts in that decades-long campaign for justice and equality, and of the important role played by South African Jews in the struggle, comparing this to those Jewish Israeli citizens who today bravely stand up to their own Apartheid system.

We then continued on to Lidl on Parnell Street, where the crowd was addressed by a woman called Amanda, who read from a blog written by a friend of hers. The extract Amanda read was written by the Palestinian-American blogger imsomadattheworld in response to an image in a campaign run by anti-Palestinian defenders of Israeli apartheid in which a young man states he has “been to Israel 30 times and I’ve never seen an apartheid” :

That’s because the 30 times that you’ve been to Israel you visited as a privileged person and never had to experience the apartheid yourself. It’s because you went to Israel and not one of the most densely populated regions in the world, Gaza, which regularly receives the brunt force of Israeli military aggression. It’s because you were never forced to give birth at a checkpoint or die because IDF soldiers wouldn’t let you pass through. You were not cut off from your farm or neighbors. You were not forced to move to an entirely different country because you were an Israeli citizen and your partner was from the west bank or Gaza. You don’t have to wake up at 4 AM in the morning every day just to pass through a checkpoint to get to work. Your home was not demolished for not having the correct Israeli permit to build it, even in the West Bank. You weren’t prevented from driving on Jewish only roads or visiting your holy sites. You aren’t denied treatment in hospitals based on your nationality. You aren’t being continuously ethnically cleansed from your land to make space for Jewish communities.  You have never seen “an apartheid” because you aren’t a Palestinian.

We concluded by going to Tesco, also on Parnell Street, and continuing to hand out leaflets. The public reception was, as always, almost unanimously supportive of our campaign and people expressed outrage at the continuing injustices inflicted upon the Palestinian people by the Israeli state.  Over the course of the day hundreds, if not thousands, of leaflets were given to Saturday shoppers  and we also collected hundreds of signatures to our petition asking Dunnes Stores to publicly commit to ceasing all trade in goods from illegal Israeli settlements in Palestine.

Why a boycott of Israeli goods?