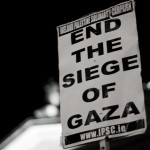 Dublin: On the evening of Friday 4th November 2011, the Irish Ship to Gaza campaign  organised an emergency demo at the Spire in solidarity with the #FreedomWaves activists kidnapped in international waters by the Israeli military. The demo called for an end to the siege of Gaza and release of the unlawfully detained international activists.

Two further demos were held on Saturday 5th at the Spire and Monday 7th November outside the Department of Foreign Affairs.

Below are some photos from the Friday demo, all courtesy of Fatin Al Tamimi. 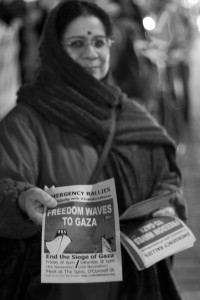