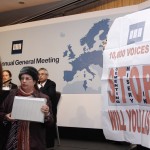 This year’s CRH Annual General Meeting in Dun Laoghaire was again the scene of calls for the company to divest from its Israeli business interests which are involved in building the illegal wall and settlements in Palestine. Two Palestinian women made impassioned pleas from the floor asking CRH to heed the 10,000 signature strong petition calling for CRH to “Stop Cementing Misery in Palestine”.  The petition and demonstration were organised by the Ireland Palestine Solidarity Campaign (IPSC).

Outside, over 50 human rights activists created a colourful spectacle along Marine Road. 33 activists each held a single placard with one letter of the campaign slogan calling on CRH to divest while others held aloft 25 feet high Palestinian flags and 30 feet long Palestinian banners. John Dorman, Divestment Officer of the IPSC, said that the intervention was because “CRH owns 25% of the Israeli company Mashav Initiative and Development Ltd, which in turn owns Israel’s sole cement producer Nesher Cement Enterprises Ltd. Nesher provide up to 90% of all cement sold in Israel, including cement used in the construction of Israel’s illegal separation wall in Palestine and illegal settlements and checkpoints.”

Palestinian human rights lawyer, Huwaida Arraf, drew a round of applause in the meeting after her heartfelt entreaty to CRH, which left board members stony-faced and decidedly awkward looking. In her speech, Ms Arraf implored CRH to divest from Israel. She said, “I am here to plead with you not be complicit in building Israel’s ghettos of the 21st Century that my family is living in right now. You say that CRH has no control over the end use of the cement that the Nesher company produces. I’m sorry but Palestinians simply can’t accept that. We cannot accept it because you knowingly invested in this company, and you are aware that the company has built this wall and these settlements, declared by the World Court to be a violation of international law. Ms Arraf concluded with a warning for CRH and its shareholders, saying that “CRH should divest from Israel like other companies are doing right now, or else they face the loss of massive contracts as companies like G4S and Veolia have seen recently as a result of their complicity with Israeli apartheid. It is tainting the reputation of your company, so please do as other companies, who care morally and ethically about their investors and investments, have done and divest”.

Next to speak on the issue was Fatin Al Tamimi, a Palestinian woman from Hebron in the West Bank. Ms Tamimi pointed out that her “hometown is now an apartheid city because of the illegal settlements and checkpoints in its centre, built with cement from Nesher. CRH says it is committed to the highest standards of ethical, legal and moral standards. All I have to do is look at my home town, and CRH’s facilitation of Israel’s apartheid regime of occupation in Palestine, to see that this is a hollow claim. And I am not the only one.”

To prove her point, Ms Tamimi concluded: that she “would like to present the Board of Directors with a petition which has over ten thousand signatures calling on CRH to stop cementing misery in Palestine and to divest from its Israeli business interests. While most signatories are Irish, there are names here from Jacksonville to Johannesburg to Jerusalem, all united behind this call. The question is, will you listen CRH?”

At this point the petition was handed to the Board in cardboard boxes decorated to represent the Apartheid Wall, while Ms Tamimi held aloft a large placard calling on CRH to listen to the call. The petition is handed to the board

During his intervention, John Dorman of the IPSC questioned whether falling profit rates for CRH were due to their continued investment in Israel. He also noted that the IPSC would be distributing a “CRH Annual Comic” in the lobby, but that it came with a health warning that “you may not find it funny that CRH profit from Israel’s occupation of Palestine”.  200 copies were distributed and the comic is available to download here: http://www.ipsc.ie/docs/crh/ipsc_crh_comic_2012.pdf Despite its products being used by Israel in the Occupied West Bank, CRH’s ‘business map’ omits the area. Strange that…