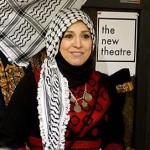 Fatin al Tamimi, a Palestinian woman living in Ireland for almost 30 years, has been elected Chairperson of the Ireland-Palestine Solidarity Campaign (IPSC), the first Palestinian in the position in the group’s fifteen year history.  She was elected at the IPSC’s Annual General Meeting last Saturday 20th February. Al Tamimi, a freelance photographer, has close family living in Hebron who she says are living in dire and worsening conditions as a result of the Israeli occupation.  She also has relatives living in Gaza which she describes as the largest open-air prison in the world, a view echoed during a recent visit to the besieged territory by Catholic Bishop of Dromore, John McAreavey.

“My interest in chairing the IPSC is to draw attention to the situation of people existing under the Israeli occupation.  The daily lives of my relatives in Hebron and Gaza are intolerable where occupation and siege are used as weapons against a civilian population by the Israeli forces.  Palestinians hugely value the solidarity of the Irish people as expressed through BDS (boycott, divestment and sanction). Every person in this country can make a difference by deciding not to buy Israeli goods, a proven method of putting pressure on governments to dismantle apartheid,” she said.

Fatin al Tamimi also wants to hear more Palestinian voices on Irish media in relation to the Palestine-Israel issue. “There are too many media reports and discussions which leave out the voice of the people most affected.  Defence for Children International recently reported that over 49 children have been killed by the Israeli military in the last five months of a total of 180 Palestinians killed in that period.  There is no question if these had been Israeli children there would be an international media storm.  We need better analysis of how and why so many people are being murdered and we need Palestinian voices in that discourse,” Ms. Tamimi said.

Like many people living in exile, Al Tamimi’s wish is to return to her native land.  “I carry the hope, determination, courage and love of Palestine with me, and my dream is to return to live in my native city of Al-Kalil (Hebron),” she said.

The IPSC has a number of ongoing campaigns, including raising awareness of the plight of jailed journalist, Mohammed Al-Qiq, who has been on hunger strike for over 90 days.  Al-Qiq is protesting his torture in detention and imprisonment without charge or trial and is reportedly near death.  Israel currently has over 700 Palestinians imprisoned under Administrative Detention Orders, a form of indefinite internment which holds people without charge or trial.  The continued detention of Al Qiq has been condemned by both Amnesty International and the International Federation of Journalists, and both have called for his immediate release.

The Ireland-Palestine Solidarity Campaign is the largest Palestine solidarity group in Ireland, set up in late 2001 by a group of human rights and community activists, academics and journalists concerned with the situation in the Occupied Territories. It is a broad-based, non-party political campaign group that supports the human, civil, political and national rights of the Palestinian people in the Occupied Territories, inside the state of Israel and in the refugee Diaspora. The IPSC has been to the forefront in promoting the Boycott, Divestment and Sanctions (BDS) campaign against Israel since the call was issued in 2005 by Palestinian civil society organisations.