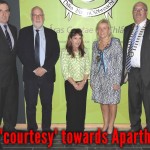 The visit to Clare last week of Israeli ambassador to Ireland Ze’ev Boker and Mrs. Amira Arnon, Director of the Northern European Department in Israel’s Ministry of Foreign Affairs has been condemned by the Ireland-Palestine Solidarity Campaign (IPSC). The Clare branch of the IPSC described the visit as “a soft-focus PR opportunity in which official representatives of the dangerous and highly repressive apartheid state of Israel were portrayed as harmless tourists. Clare County Council has said that the visit was merely a ‘courtesy call’ – we believe there should be no such local courtesy extended to representatives of the Apartheid state.”

Regional IPSC spokesperson Zoe Lawlor stressed that these were not just the views of the IPSC. “The UN Human Rights Council has adopted numerous resolutions condemning Israel human rights abuses and violations of international law, most recently last March. Israel is in breach of more UN resolutions than any other state, and has been condemned repeatedly by Amnesty International, Human Rights Watch and many other human rights groups; it is a serial human rights abuser”.

Ms. Lawlor pointed out that “for decades Israel has been engaged in an ongoing process of the theft of Palestinian land and resources, building illegal colonial settlements in violation of the Geneva Convention, and the ethnic cleansing of the indigenous people, all the while presiding over a brutal military occupation and apartheid regime. Israel systematically oppresses millions of Palestinians in the Occupied Territories, and officially discriminates against the Palestinian minority who are citizens of Israel. A 700km wall, taller than the Berlin Wall, is being built in the West Bank with 85% of it on Palestinian land. Deemed illegal by the International Court of Justice in 2004, it is dividing whole communities from their farm land, water sources and each other while stealing yet more Palestinian land”.

“Mr. Boker and Mrs Arnon represent a government whose members have called for the beheading of Palestinians, who have said Palestinians should be expelled and their land seized, and who have called for Palestinian women to be murdered before they can ‘give birth to little snakes’. These diplomats, professional apologists for Apartheid and war crimes, are not suitable people for the chair of Clare County Council and the Mayor of Ennis to meet. This visit was an insult to Palestinian community in Clare and throughout Ireland, and we know from our activities on the streets of Clare that the Israeli state has no support here. The elected representatives of the people should act according to the people’s will”.

“Ordinary people all over the world are increasingly supporting the call to boycott Israeli goods and institutions, divest from them and sanction them for their many crimes. A similar tactic helped bring an end to the racist apartheid regime in South Africa. This has grown immensely since the massacres Israel has carried out in Gaza in recent years. Israeli occupation forces killed more than 2,200 people, the overwhelming majority of them civilians, including more than 500 children, in the 2014 onslaught alone”.

“Clare IPSC calls on the council to respect the wishes of people in Clare, Ireland and around the globe and stand on the right side of history. The BDS campaign is a grassroots, peaceful and democratic way to compel Israel to comply with the human rights and international laws it is constantly breaking,” Ms Lawlor concluded.