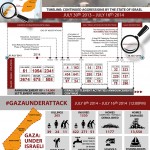 Yesterday it was reported that Hamas and other Palestinian militant factions “rejected a ceasefire” agreement with Israel. Yet this was not a negotiated ceasefire, it was a unconditional ceasefire presented by Egypt and Israel to Palestinians on a ‘take it or leave it’ basis. Palestinians only heard about the ceasefire “through the Media”, according to several spokespeople. Furthermore, the terms of the agreement did not include an end to the seven year long illegal siege of Gaza, which is a fundamental issue, nor address other concerns which Hamas and other groups have openly stated must be part of any such agreement.

IPSC media spokesperson Freda Hughes said: “As the death toll today for Palestinians today surpasses 200, and the conflict has witnessed its first Israeli death, an end to the Israeli assault and efforts toward a genuine, just ceasefire are of paramount importance. Any such ceasefire will include all actors and have at its core an end to the illegal and inhuman siege of Gaza and the cessation of Israel’s attempts to destablise the fragile Palestinian unity government. The international comunity must pressure the Israeli government to make this happen.”

The US-based Institute for Middle East Understanding yesterday interviewed leading experts on the Palestine-Israel issue about the ceasefire. We reproduce below some of their answers.

NOTE: Prof Rashid Khalidi and Asst. Prof Noura Erakat are two of the many experts that the Ireland-Palestine Solidarity campaign can ARRANGE INTERVIEWS WITH for media outlets – a full list of experts is available to interested journalists.

Q – Why do you think Hamas didn’t accept the terms of the ceasefire?

Rashid Khalidi – “Hamas has insisted that there be a lasting resolution of the basic problem of Israel’s siege of Gaza, as was promised as part of the 2012 cease-fire, but never implemented in spite of Israel’s recognition that Hamas scrupulously maintained the cease-fire until quite recently. The Egyptian proposal makes lifting of the siege conditional on Israel’s approval, which means never.”

Noura Erakat – “Within two days of Israel’s aerial assault on the population of the Gaza Strip, Hamas announced five conditions for a ceasefire: 1) stop the airstrikes; 2) observe terms of 2012 ceasefire; 3) release the Palestinians released during the Shalit prisoner exchange who were recently re-arrested; 4) lift the siege; and 5) don’t interfere with Palestinian unity government. What little is known about the proposed ceasefire agreement is that it demands a cessation of violence with no conditions thus reverting to conditions that are even worse than the status quo ante.

“This clearly weakens Hamas politically, exacerbates the humanitarian conditions under which Palestinians struggle, and emboldens Israel to strike again with zero accountability. That said, it is not in the Palestinians’ best interest for Hamas to continue launching rockets regardless of the circumstances, as it provides a justification for Israel to continue its brutal attacks on a defenseless and besieged population.”

Q – What will be required for a ceasefire to be accepted by both sides?

Rashid Khalidi – “Either serious external pressure on the parties, especially Israel, or the exhaustion of both sides, which is not yet apparent.”

Noura Erakat – “Hamas has made its five demands clear and its observance of the November 2012 ceasefire demonstrates its good faith. In contrast, it is not clear what Israel’s endgame is. It seems willing to accept a ceasefire on condition of Hamas’s unconditional capitulation, but what will ensure that it does not indiscriminately attack the 1.8 million Palestinians in the Gaza Strip again? Israel has said it is bombarding Gaza in retribution for the death of three Israeli teens though it has failed to produce a single shred of evidence incriminating the Hamas leadership. Israel also claims it wants to decimate Hamas’s capability to launch rocket and mortar fire but this makes little logical sense since in the past diplomatic efforts have done much more to yield a cessation in rocket attacks than have military ones.”

Q – What do you think Israel’s actual goals for bombing Gaza are?

Rashid Khalidi – “Israel’s main goals are to weaken Hamas and to prevent an inter-Palestinian reconciliation, which would strengthen the Palestinians and make them more capable of resisting inexorable Israeli pressure.”

Noura Erakat – “Prime Minister Benyamin Netanyahu is attacking Gaza in response to domestic and international political considerations that have nothing to do with any threat posed by Hamas. Right before the start of this latest assault on Gaza, Netanyahu suffered several blows politically: he failed to thwart the start of a US-Iran rapprochement; was unable to stop the establishment of a Palestinian unity government; and was widely blamed for the collapse of the peace talks renewed by US Secretary of State John Kerry last summer. His political standing a well as that of Israel’s had been seriously weakened and by launching an attack on the Gaza Strip, he appears strong to the Israeli public, shifts international attention away from Israel’s responsibility for the failure of negotiations, and puts enormous pressure on the recently formed Palestinian Authority national unity government, which Israel wishes to undermine.”

UPDATE: Two Palestinian factions have released their conditions for a ceasefire this afternoon. They are as follows (translated by The Electronic Intifada):