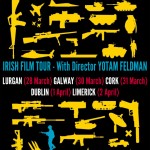 In late March and early April the Ireland-Palestine Solidarity Campaign and several other organsiations are hosting special national film screening tour featuring the award winning new documentary about the military-industrial complex in Israel which explores how it is helping to turn Palestine’s blood into Israel’s profit.

This series of FREE SCREENINGS will take place in the following dates. All screenings will be followed by a discussion with the film’s director, Yotam Feldman who is on a tour of Ireland.

This is a very important film that shines a much needed light into a very dark area of the Israeli and international collusion in the destruction of the Palestinian people. It is a compelling investigation into one of the reasons we are calling for an end to the Irish Arms Trade with Israel.