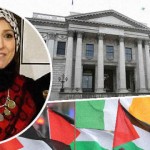 The Ireland-Palestine Solidarity Campaign (IPSC) welcomed today’s announcement that Dublin City Hall will fly the Palestinian flag between 15th May and June this year, following a unanimous vote by city councillors on the council’s Protocol Committee.[1]

Obviously this move will cause extreme anger amongst the ranks of the small but vocal group of apologists for Israeli Apartheid in this country and DCC will come under a certain amount of pressure and intimidation, and so we are asking our supporters – especially those who live in Dublin – to please contact the Dublin City CEO Owen Keegan, the Lord Mayor of Dublin Brendan Carr and ALL DUBLIN CITY COUNCILLORS who still have to ratify this decision on May 8th to express your support for the move.

“We in the Ireland Palestine Solidarity Campaign sincerely thank Dublin City Council for voting for this important symbolic measure. It is, in the words of the motion itself, a heartening ‘gesture of [Dublin’s] solidarity with the people of Palestine living under occupation in the West Bank and Gaza, with the Palestinian citizens of Israel denied basic democratic rights and with the over 7 million displaced Palestinians denied the right of return to their homeland’.

“I’m sure I am echoing the views of all Palestinians in Ireland in saying that this gesture has been truly soul-stirring and deeply emotional on a personal level. Dublin is a city that welcomed me when I first arrived here to start a new life, and I am so proud and honoured that my adoptive city will fly the flag of my homeland, Palestine, in an amazing act of solidarity with my people.

“Finally, we would like to especially thank Cllr. John Lyons for proposing the motion and all the members of the Council’s Protocol Committee for voting unanimously in favour of the proposal.”

[1]: The full text of the motion reads: “Noting recent reports of diplomatic developments by the Irish state toward full recognition of the state of Palestine, aware also that Ireland accorded the Palestinian delegation in Dublin diplomatic status in 2014, the same year that witnessed both Houses of the Oireachtas pass motions  in support of Palestinian statehood, this city council will fly the flag of Palestine over City Hall for the month of May 2017 in support of the above diplomatic moves and as a gesture of our solidarity with the people of Palestine living under occupation in the West Bank and Gaza, with the Palestinian citizens of Israel denied basic democratic rights and with the over 7 million displaced Palestinians denied the right of return to their homeland.” – Proposed by Cllr. John Lyons, 30/03/17