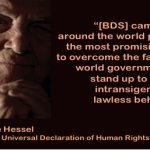 Occupied Palestine, 27 February 2013 — The BDS National Committee (BNC) mourns the tragic loss of our comrade, partner, and dear friend Stephane Hessel.
A thoughtful and principled supporter of the global, Palestinian civil society-led Boycott, Divestment and Sanctions (BDS) movement, Stephane Hessel exuded hope and inspiration.
As a co-author of the Universal Declaration of Human Rights, he deeply appreciated the necessity of advocating for equal rights for all humans, regardless of identity. This and the fact that he is a Holocaust survivor were crucial factors behind his endorsement of BDS despite the high price he had to pay.

He wrote:
“[BDS] campaigns around the world present the most promising way to overcome the failure of world governments to stand up to Israel’s intransigence and lawless behavior.”
Israel and its well-funded lobby groups vilified him, applied pressure on universities to censor him and did everything possible to silence his unique moral voice. His thought and principles, after all, negated their brutal occupation, colonialism and apartheid. Palestinians will dearly miss Stephane.