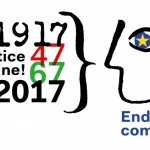 Over 250 European – including 22 Irish – organisations, faith groups, political parties and trade unions today issued a statement demanding justice and accountability from the EU and European states, as 2017 marks:

The aforementioned anniversaries remind us of the responsibility of the colonial powers in creating the disastrous situation which continues until today, in violation of the rights of the Palestinian people, international law and UN resolutions.

100 years since the Balfour declaration, Israel continues to expand its colonial project in the Palestinian homeland. As a consequence, over seven million Palestinians remain in exile and are denied their legally sanctioned right of return, while others continue to be uprooted on a daily basis. Britain and other European states not only continue to evade their fundamental responsibility for the colonisation of Palestine, but remain actively complicit in Israel’s ongoing violations of international law and its human rights abuses.

Justice cannot be achieved without recognition of the historical facts!

The signatories to the statement called upon the EU and its member states to cease all complicity with Israel’s continued settlement activity and demanded an immediate end to the blockade of the Gaza Strip, freedom of movement for Palestinians, equality for all citizens of Israel, respect for the right of return of the Palestinian refugees, and to take binding measures vis-à-vis the State of Israel, including the suspension of the EU Association Agreement with Israel, as long as it continues to violate international and human rights law.

In addition, the more than 250 signatories pledged to intensify their actions in order to pressure the EU and European states to end their complicity with Israeli violations of Palestinian rights.

Aside from the Ireland-Palestine Solidarity Campaign, the Irish signatories include Trocaire, Afri, Sinn Fein, and the Mandate and CWU trade unions.