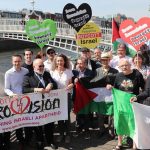 The authors inform Sarah McTernan of Israel’s use of ‘pinkwashing,’ which they describe as a “PR tactic used by Israel which cynically exploits support for LGBTQIA people to whitewash its oppression of the Palestinian people” and call on the singer to listen to Palestinians, “especially the voices of LGBTQIA Palestinians, who are calling on you not to go to the Eurovision Song Contest as long as it is hosted by the state that brutally oppresses them.”

This is the latest stage of an international campaign calling for a boycott of this years’ competition, which is being used to ‘artwash’ and ‘pinkwash’ Israel’s occupation of Palestine and appalling record of war crimes and human rights abuses.

In January, over 100 LGBTQ+ organisations issued a statement calling on “members of the LGBTQIA community to boycott Eurovision 2019 so long as Israel is hosting it.”

In Ireland, the boycott call has been supported by the Musicians Union of Ireland, Irish Equity and many prominent figures associated with former Eurovisions, as well as respected public figures in the arts, humanities and human and civil rights fields. Derry & Strabane council and Sligo County council voted support a boycott, and over 17,000 people signed a petition to RTÉ calling for non-participation. A separate petition to Sarah McTernan has garnered over 5,000 signatures.