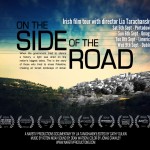 The Ireland-Palestine Solidarity Campaign is proud to host a film tour featuring Israeli director Lia Tarachansky and her award-winning documentary ‘On the Side of the Road’ between Saturday 5th and Wednesday 9th September 2015.

All screenings are free and will feature a post-show discussion and Q&A with the director.