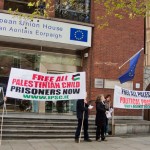 With placards calling for an end to internment, freedom for all Palestinian political prisoners and for MEPs to vote to a new trade agreement with Israel (ACAA), members and supporters of the Ireland Palestine Solidarity Campaign held a lunchtime picket outside the EU building in Dublin to mark Palestinian Prisoners Day (April 17th).

The aim was to “highlight the European Union’s ongoing facilitation of Israel’s apartheid policies and war crimes against the Palestinian people. The imprisonment of over 4,600 political prisoners, including over 300 internees, in a brutal and repressive prison regime is only one facet of this apartheid. Indeed, when one considers the ongoing siege of Gaza and denial of access to the West Bank, Palestine can be viewed as one large open air prison camp”, said to IPSC spokesperson Kevin Squires. “We are targeting the EU, as it is Israel’s biggest trading partner, and the Additional Protocol to the Euro-Mediterranean Agreement establishing an EC-Israel Association on an EC-Israel Agreement on Conformity Assessment and Acceptance of Industrial Products (ACAA) which is currently being debated at the European Parliament, if adopted, will thus increase these trade relations.

“We are calling on Irish MEPs in the EU Foreign Affairs and Foreign Trade committees to vote ‘No’ to ACAA, and for a no vote in the plenary session of the European Parliament in June. Israeli apartheid must not be rewarded, it must be opposed by concrete actions by governments who declare they support human rights. Appeasing apartheid is simply not an option, and it is beyond time for the EU to take meaningful action against Israel,” Mr. Squires concluded.

You can also take action on this by emailing all Irish MEPs here.

Due to bad weather, the IPSC’s planned information stall on Palestinian prisoners had to be postponed, but the IPSC were back on the street on Thursday evening where they distributed 100s of leaflets raising awareness of the prisoners issue, and asking people to contact Irish MEPs regarding ACAA. You can download a PDF of the leaflet here.

Amnesty International says Israel uses Administrative Detention “to lock up Palestinian activists without charge or trial”. As Amnesty notes, these detention orders can be repeatedly renewed, “so in effect detainees can be held indefinitely. The process violates their right to a fair trial which is guaranteed by international law”. However, Administrative Detention is only one aspect of the larger prison regime used by Israel to suppress Palestinian resistance to occupation and Apartheid. The vast majority of political prisoners are ‘convicted’ by non-jury Israeli Military Courts. These courts, biased from the outset, do not meet international fair trial standards. As Amnesty points out, Palestinians “continue to face a wide range of abuses of their right to a fair trial. They are routinely interrogated without a lawyer and, although they are civilians, are tried before military not ordinary courts”.

Furthermore, Amnesty says that ”consistent allegations of torture and other ill-treatment, including of children, were frequently reported. Among the most commonly cited methods were beatings, threats to the detainee or their family, sleep deprivation, and being subjected to painful stress positions for long periods. Confessions allegedly obtained under duress were accepted as evidence”. It is worth noting that Palestinians in the Occupied Territories are subject to Israeli military law, while Israel’s illegal settlers are governed by Israeli civil law – a clear example of Israel’s Apartheid system.

For more information about Palestinian political prisoners, please see the ADDAMEER website, or this section of the IPSC website.

For more background to the EU and Israel, please see the relevant section of our website here.