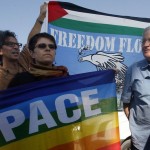 Press Release from Gaza Action Ireland: In response to a request by Gaza Action Ireland and the flotilla steering committee, the noted social activist and philosopher Professor Noam Chomsky has made the following lengthy statement in relation to the hijacking by Israel of the SV Estelle and the ongoing blockade of Gaza:

Noam Chomsky said: “I’m here in Gaza, I’ve been here for several days. I was here hoping to greet the latest boat from the Flotilla, the Estelle. We were waiting at the Gaza port. The boat, like earlier ones, was hijacked by the Israeli navy. They call it Israeli territorial waters, it’s actually Gazan waters or international waters, Israel has no right to those waters. The Estelle was another effort to break the siege, as in some way is our visit. The siege is a criminal act that has no justification. It should be broken and it should be strongly opposed by the outside world. It’s simply an effort to intimidate the Gazans into self-destruction, to try to get rid of them and destroy the society. There is absolutely no justification for it – military justifications are claimed but they have no credibility. The people on the boat should be honoured and respected for their courage and commitment and for undertaking a brave and important effort to break the siege, the criminal siege, and bring hope to the people of Gaza who are imprisoned, literally imprisoned in the biggest prison in the world. Also to bring to the world the message that we on the outside have a real responsibility to bring these criminal acts to an end.”