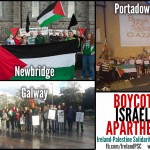 On Thursday 26th August, IPSC branches in Galway, Newbridge and Portadown organised solidarity protests against the ongoing siege and renewed bombing of Gaza, and calling for freedom for Palestinian hunger strike Bilal Kayed, who ended his fast after 71 days without food.

Portadown: Ireland to Gaza – Hand in Hand to Break the Siege

The Portadown branch of the Ireland Palestine Solidarity Campaign (IPSC) responded positively to a request received on Tuesday night from their contacts in Gaza asking them to show solidarity in the wake of Israeli attacks earlier this week by organising a street vigil in the town on Thursday evening (25th August).

For the past two years, Portadown IPSC has been actively supporting a women’s cooperative project in Gaza.

IPSC members and supporters gathered on Portadown’s Garvaghy Road at 8.30pm for an hour long vigil to show solidarity with the people of Gaza in the aftermath of Israel’s airstrikes and naval bombardment of the region on Sunday 21st August.

In an innovative display, IPSC members also organised an out-door slide-show as darkness fell with images of the impact of the Isreli blockade on daily life in Gaza projected onto a gable wall facing the Garvaghy Road, one of the main roads leading into the County Armagh town.

The slideshow projected images of last Sunday’s Israeli attack on Gaza and carried messages calling for an end to the siege and blockade of Gaza.

Speaking after Thursday’s vigil, Ciarán Ó Fearghail, the chairperson of the local IPSC branch, said “We are very pleased at the turnout tonight with almost forty local people participating in the vigil calling for an end to the siege of Gaza. It shows that interest and support for the plight of the Palestinian people and their struggle for freedom is still strong locally.

“Additionally, we’re also pleased that our decision to project large temporary images illustrating the reality of life in Gaza was successful and this is something that we will further refine and improve upon for use in the future.”

Thursday night’s vigil followed another IPSC organised event in Portadown the previous weekend when around thirty people took part in a show of solidarity with Palestinian hunger-striker, Bilal Kayed, on Saturday 20th August. The rain didn’t stop Galway locals turning out to stand in solidarity with the besieged people of Gaza, and to call for freedom for prisoner Bilal Kayed and all Palestinian political prisoners. The protest also called on people to support the growing global Boycott, Divestment and Sanctions (BDS) movement for justice for Palestinians. Members and supporters of the Kildare IPSC held a solidarity vigil outside NEwbridge town hall riasing the issue of Palestinian hunger striker Bilal Kayed, and calling for an end to the ongoing attacks and the illegal siege imposed upon the people of Gaza.