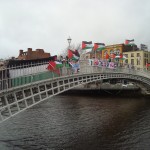 To commemorate the third anniversary of the Israeli ‘Operation Cast Lead’ attack on Gaza, the Ireland-Palestine Solidarity Campaign (IPSC) organised a vigil on New Year’s Eve on  the Ha’penny Bridge in Dublin.

The Israeli massacre during Winter of 2008/2009 left over 1,400 people dead, thousands injured and destroyed the civilian infrastructure of the tiny coastal region. The Gaza Strip, home to over 1.5 million people, remains under a cruel and illegal Israeli-imposed siege.