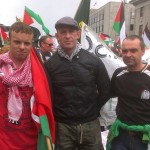 The Ireland-Palestine Solidarity Campaign in New Ross has responded to a Facebook posting (screenshot below) by Wexford County Councillor Michael Sheehan in which he claimed that the “people of Gaza do better from the government than the people of Wexford”.

Andy Kerrigan, Chairperson of the IPSC New Ross branch said: “We have been asked by many people about our views on Cllr. Michael Sheehan’s recent statement trivialising the devastation and current situation in Gaza to make a point about the recent budget in Ireland.

“According to the latest UN report, there were 2,104 people killed as a result of the Isaraeli onslaught, of which 69% were civilians including 495 children and 253 women. It is estimated that €8 billion are going to be needed to rebuild the infrastructure including the many schools, hospitals and water and power plants that were destroyed.

“That Cllr Sheehan feels the need to object to the Irish government financially supporting the people of Gaza is disappointing, and a kick in the teeth for ourselves and many others in County Wexford who have a long history of supporting humanitarian causes, as do many elected representatives of his own party who have worked with us in the past on Palestinian issues.

“This is not forgetting our own view that any funding to rebuild Gaza should come from the Israeli state as they are the ones guilty of destroying it, and also its American government sponsors who provide them with €3 billion every year in military aid to enable them to carry out such atrocities.

“Again we call on Irish and EU politicians to oppose the Euro Med Agreement which gives preferential trading rights to Israel, despite its consistent violations of international law. Israel acts like a mad dog rogue state, it’s beyond time to rein it in”.