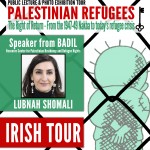 She will tour Ireland from Monday 9th to Saturday 14th May.

Her talk will be a first-hand account of the key issues regarding Palestinian refugees, from the 1947-49 Nakba when over 700,000 Palestinians were forcibly dispossessed and exiled from their homeland to facilitate the creation of the state of Israel up to the refugee crisis of the present today. There will also be an exhibition of photographs chronicling the current plight, the ‘ongoing Nakba’, of Palestinian refugees.

Today there are more than five million Palestinian refugees, many who are refugees for a second or third time, all denied their international law-mandated Right of Return by Israel. Palestinian refugees are once again caught up in the crisis, many of them risking their lives crossing the Mediterranean to flee the brutal civil war in Syria, endemic poverty and discrimination in Lebanon, and Israel’s cruel illegal siege of Gaza. Come along to find out more, and to see what we can do to help them get home.