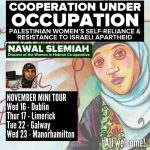 Nawal will be speaking in the following places to tell the story of her co-operative and what it is like to live, work and co-operate under the Israel’s apartheid regime.

Nawal will also be showcasing some of the goods produced by Women In Hebron and they will be available to buy at the events.