To all of our members and supporters: Happy Holidays from the IPSC! 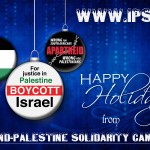 2014 was an incredible year for Palestine solidarity work in Ireland, with the biggest ever outpouring of public solidarity with the Palestinian struggle for freedom coming during Israel’s summer slaughter in Gaza when tens of thousands of people mobilised all over Ireland to demand freedom and justice for Palestine. Unfortunately, the international community in the West remains largely indifferent to the fate of the Palestinian people, even after more than 2,000 of them – including more than 500 children – were killed during the Israeli attack.

While the recent votes by the Dáil and Seanad to recognise a Palestinian state are to be welcomed, concrete action and sanctions are needed to help pressure Israel and to support the Palestinian struggle for freedom, justice and equality. Yet Western governments – including our own – have shown that they are unwilling to do anything concrete to stop Israel’s brutal, racist oppression of Palestinians… but ordinary people thoughout the world have said ‘Enough!’ are taking a stand for justice.

Of course, the ‘silent majority’ didn’t just wake up one day and decide to support the Palestinian struggle – the numbers we saw on the streets and taking actions are a result of years of campaigning groundwork by Palestinian solidarity activists, on the streets, in the media, online, and coalition building with trade unions, other NGOs and politicians. What is crucial for 2015 is that the outrage and compassion generated by the Israeli assault last summer be channeled into building a strong and effective Boycott, Divestment and Sanctions (BDS) movement in this country, and not be allowed to merely dissipate until the next time a massive slaughter of Palestinians happens, which is an inevitability if we don’t act now to prevent it.

This is why the work of civil society groups such as the Ireland-Palestine Solidarity Campaign is so vital – we must build a movement for Palestine, and a movement in support of the Boycott, Divestment and Sanctions campaign. BDS is a peaceful, effective way to show your disgust at Israel’s slaughter, and to force Israel to comply with international law and to respect the human rights of the Palestinian people.

For example, supporters of the IPSC brought the ‘Boycott Israeli Goods’ message to Christmas shoppers in Dublin this week, with an information stall, and a peaceful action at a stall selling Israeli products in the Ilac Centre. You can watch a short video of this action by clicking on the image below.

You can also read the leaflet we handed out to shoppers by clicking here.

Also, last Wednesday the IPSC and friends handed in a petition of over 8,000 people calling on Dunnes Stores to cease stocking goods from Israel’s illegal settlements in the occupied Palestinian territories. You can also read more, see images and watch a video by clicking on the image below (or by clicking here). 2014 was designated International Year of Solidarity With the Palestinian People by the UN. The Palestinian people’s ongoing fight for their rights demands that every year is an international year of solidarity, until there is a just peace for Palestinians!