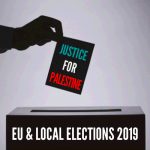 It’s that time of year again, when politicians come knocking on doors looking for your vote. This May there will be European and Local elections in Ireland north and south. While domestic issues are, as always, likely to dominate the discussions, we believe it is vitally important that the issue of Palestine is kept firmly in the minds and mouths of all our politicians. The very essence of the Palestine solidarity movement is to ‘think globally, act locally’ – and we have seen impressive local support for Palestinian freedom by many local councils over the past decade. We need to make sure that Palestine is and remains an election issue!

Please find below some quick questions for candidates – both EU and Local – and an easy-to-print version that you can keep handy for when they come calling. We also encourage you to email your candidates these questions.

Here is a handy email list of EU candidates we could find addresses for.

In addition, we have asked these same questions of all European Election Candidates and have published their answers on our website here. We think it’s hugely important that voters know where EU candidates in particular stand on the issue of the EU’s ongoing collaboration with Israeli apartheid and oppression of the Palestinian people.

Four Questions on Palestine-Israel for Candidates

1) Will you support the call to prohibit the import and sale of goods, services and natural resources originating in illegal Israeli settlements in Palestine?

2) Will you protect the right of European citizens to free speech, including the right to engage in the non-violent Boycott, Divestment and Sanctions (BDS) campaign and act against any attempts to criminalise Palestine solidarity?

3) Will you oppose any upgrade of European agreements with Israel and call for suspension of EU-Israel Association (EuroMed) Agreement until Israel abides by its human rights clause?

4) Will you support the exclusion of Israeli arms manufacturing and other military companies from EU Research Programs and EU contracts?

Three Questions on Palestine-Israel for Candidates

1) Will you support the call to prohibit the import and sale of goods, services and natural resources originating in illegal Israeli settlements in Palestine? Will you lobby within your party to support the Control of Economic Activities (Occupied Territories) Bill currently before Dáil Eireann which seeks to do exactly this?

2) Will you protect the right of Irish citizens and residents to free speech on Palestine, including the right to engage in the non-violent Boycott, Divestment and Sanctions (BDS) campaign and act against any attempts, local or national, to criminalise Palestine solidarity?

3) Will you support the creation of Israeli Apartheid Free Zones – spaces that endorse the principles and tactics of the non-violent Palestinian Boycott, Divestment and Sanctions (BDS) campaign – in local communities and in City/County Councils?