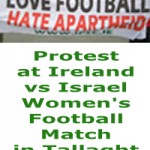 The Ireland Palestine Solidarity Campaign (IPSC)  today issued a call to heed Palestinian civil society and ‘kick apartheid out of women’s football’. Supporters of Palestine will be organizing a protest at the Irish women’s soccer team European Cup qualifying match with Israel on Saturday, October 22 at Tallaght Stadium.

The match kicks off at 3pm and the protest will start at 2 pm outside the stadium. Banners reading, ‘Love Football, Hate Apartheid’, ‘Boycott Israeli Apartheid’ and ‘Unity against Occupation’ will be displayed. The protest will be a peaceful act of solidarity with the people of Palestine.

While the Israeli team can travel and play freely, the Israeli government denies such basic everyday freedoms to the Palestinian women’s football team . The Palestinian women’s team needs to practice on concrete soccer pitches, since the only real soccer field in the West Bank is in Jericho, semi-inaccessible because of stringent Israeli military checkpoints. Women players from Gaza have not been able to leave the strip and play with the rest of the team for many years now. Travelling abroad is fraught with difficulties, with Israeli authorities regularly refusing visas to Palestinian female and male footballers alike. In 2005 the coach of the Palestinian women’s team resigned after being detained and interrogated for hours at the border by Israeli authorities; he found the experience too traumatic to repeat.

As IPSC Chairperson Martin O Quigley stated “While Palestinian women players have to endure these inhumane conditions by Israeli authorities, we cannot pretend there is anything normal about this match with Israel. In Israel it is clear that sport and politics mix. More than this. Sport and racism mix. Hence the theme of our protest: ‘Love Football, Hate Apartheid’.”

“The IPSC points to the sporting boycott against South Africa, which was one of the most effective tools employed in ostracising that state and revealing to the world its apartheid regime and disregard for human rights. Similarly, we are taking this opportunity to expose apartheid in Israel/Palestine. We call for a sporting boycott of Israeli teams who serve as ambassadors for that state. We are also calling on Irish fans not to travel to Israel for the return leg of the game as an act of solidarity with the Palestinian people.

The protest will call for a sporting boycott of Israeli football teams. The Palestinian Campaign for the Academic and Cultural Boycott of Israel (PACBI) have confirmed that this game falls under their Boycott, Divestment and Sanctions (BDS) guidelines.