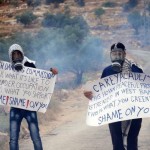 In the aftermath of the announced cancellation of the Israeli Feis Irish dancing competition last week, many mainstream media outlets have been quick to regurgitate the organisers’ claims that it was cancelled due to ‘threats’ – without offering any evidence of said threats. The IPSC has already debunked, at great length, the defamatory claims of the Carey Academy – but the media response deserves a critical examination.

For example, the Irish Independent published a story by David Kearns online under the headline “Israeli feis cancelled after threats by ‘Irish supporters of Palestine’”. Thus the headline assumes the veracity of these purported threats without providing any evidence in the article of their existence– something presumably realised by the editors, as it was subsequently (and stealthily) altered to read “Israeli group claimed they had to cancel feis after receiving threats”.

However, what all of the aforementioned articles have in common is that not one of them investigated whether or not there was any evidence of threats – verbal or physical – as alleged by the organisers, the Carey Academy. Not one of these outlets thought it necessary to ask the Carey Academy for any proof of threats before publishing allegations that such threats had indeed been made.

A brief thought experiment. Imagine someone alleged that Denis O’Brien physically threatened them. Do you think for one minute any mainstream media outlet would publish the allegation without seeking airtight proof of such a threat first? We’re talking about a media that wouldn’t even publish an allegation made against one of Denis O’Brien’s companies that was made under parliamentary privilege in Dail Eireann, so it should be obvious what the answer is.

Yet when it comes to the Ireland-Palestine Solidarity Campaign and similar groups, the rules change and almost anything goes. It seems that groups without the financial capacity to legally defend themselves are fair game for defamation in the Irish press. We saw the same dynamic a number of years ago when the Irish traditional group Dervish cancelled a gig in Israel following a campaign of moral pressure from BDS campaigners. Without evidence, citing an ambiguously worded statement from the lead singer of the group, Irish media outlets – the Irish Times in the vanguard – reported that BDS activists had threatened, harassed and cyberbullied the group into cancelling.

In a deconstruction of this inglorious saga journalist and lecturer Harry Browne wrote, in an exhaustive piece on Politico.ie, that

“[the] story, however, was fundamentally untrue. The newspaper was told repeatedly that it was untrue, and the evidence was before its eyes on Dervish’s Facebook page. But it took nearly a fortnight after the first story appeared for the Irish Times even to publish a letter that cast doubt on key elements of the narrative.”

This fiasco of lies and smears continued for a month and included derogatory comments from the, now disgraced, then-Justice Minister Alan Shatter, yet

“despite a detailed formal complaint from the IPSC to both the newspaper and the Press Ombudsman, the paper has never clarified or corrected the misleading impressions and inaccurate details of that story … the Press Ombudsman, Prof John Horgan, rather breezily rejected the long and complex complaint without ever appearing to address the basic question of the story’s accuracy.”

Sadly, it appears we are seeing history repeat. Journalists – whether for reasons of ideology, idleness or ineptitude – are not interested in getting to the truth of the issue, but merely repeating spurious remarks in a ‘claim/denial’ manner, sometimes without even bothering to report the denial. The Jerusalem Post even went so far as to call up and interview the organisers of the feis in Israel for a very sympathetic piece… without asking them to provide any proof of their allegations (though given the political orientation of that paper, this is hardly a surprise). Incidentally, the piece also attributes a quote – “Victory Declared – another decisive battle in the war against apartheid” – to the IPSC. For the record, the IPSC never made this statement.

Thus it was left to concerned members of the public to investigate the outrageous claims of the Carey Academy that there had been threats and possibly even a violent demonstration outside their school in Birmingham.

Despite repeated calls on the Carey Academy to produce, both openly on their Facebook page and in alternative media outlets, the Academy has not offered one scintilla of evidence to back up their claims of threats to teachers, parents and students by the Ireland-Palestine Solidarity Campaign, the individuals named: Raymond Deane, Kevin Squires, Amanda Crawford or anyone else. For the record, the IPSC categorically rejects allegations that it, or anyone officially associated with it, made threats to the organisers or anyone else connected to the Israeli Feis. And we reiterate that absolutely no evidence has been proffered to substantiate such claims.

With regard to the demonstration at the school in Birmingham, which the Carey Academy insinuated was a danger to the “safety of [people] connected with the Academy”, the IPSC contacted the England-based organisers of the protest who provided us with video and a statement about the event.

The video can be viewed here. It shows an entirely peaceful protest of about fifteen people, many of them middle aged, and including one wheelchair-bound child, standing outside the locked gates of the deserted carpark of the entirely empty school. Furthermore, the organisers had alerted the police in advance about the demonstration, the police were present at all times at the protest where relations between officers and protesters were extremely friendly. Needless to say, no arrests were made. The organisers stated that they “considered how to get our peaceful message across” to parents and teachers “without upsetting any children.” Does this sound like a “not-so-peaceful” demonstration – as the Carey Academy initially referred to it – that endangered anyone connected with the Carey Academy or the Israeli Feis? Why, with all of the resources at their disposal, could the mainstream media not find and report this information? It only took the IPSC a phonecall and an email to discover it.

Another interesting titbit is that the IPSC was contacted by a woman who had written to the Irish Dancing Commission (CLRG) who were involved in promoting the Feis on their website. This woman told us she “wanted to see where the CLRG stood on the [Carey Academy] statement and to see if they actually had received any [threats] themselves”. The CLRG’s response was very interesting. They said that the CLRG had “received correspondence from various organisations and individuals both for/against this feis taking place but none of this correspondence was of a threatening nature”. Read that again. None of this correspondence was of a threatening nature.

Therefore, we are to supposed to believe that while the CLRG – which was the main focus of the IPSC’s campaign due to their promotion and support for the feis and their being indirectly funded by Irish taxpayers – received no threatening messages, the Carey Academy, students and their parents – which were not a focus of the IPSC’s campaign at all – did. This is an utterly ridiculous proposition. We have to ask why the mainstream media has not highlighted this incongruity?

Finally, nowhere in the mainstream media have possible alternative reasons for the cancellation been explored. The IPSC has already posited one potential reason – namely that:

[Perhaps] having been taken to task by international human rights activists and realising the increasing indefensibility of their position and having their name and reputation associated with Israeli apartheid, The Carey Academy decided to pull the plug on the event, but sought to insinuate that non-existent threats of violence were the rationale.

…if the boycott didn’t have an effect on participation. Back in May, the final date to book a room at the feis official hotel, according to 1st Israel Feis Facebook page, was “not later than in 45 days (1st of July) before the event”. Then July 1st rolled around, and rooms were still available and the exclusive price for participants in the feis got shoved back to July 5th. Two days later, the event was canceled. If the hotel wasn’t filling up, perhaps that reflects the popularity of the event. Perhaps few dancers in the international Irish dancing community want to travel to Sun City Tel Aviv and break the boycott. Maybe just maybe– the non violent #Don’tDance4Israel campaign worked just the way it was supposed to.

There is nothing else to call this except shoddy and shameful journalism which facilitates Zionist attacks on human rights and solidarity organisations. That this is not the first time the mainstream media, particularly in Ireland, has misreported and mischaracterised both the Palestinian-led BDS movement, and campaigns involving the IPSC. It stands as a further indictment of the low standard of journalism regarding social justice issues.

Indeed, the lines Harry Browne wrote in 2012 unfortunately still ring true today – we are seeing another “a miscarriage of journalism, a series of stories in the [media] that condemn the IPSC for sins it hasn’t committed, while ignoring or deriding the wider issues the organisation sought to raise.”