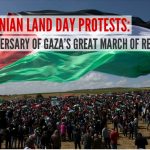 On Friday 29th and Saturday 30th March there will be mobilisations in Derry, Dublin, Belfast and Limerick to respond to the call from Gaza to mark the first anniversary of the heroic Great March of Return and to protest against the escalation of attacks on Gaza. The date also marks the 43rd Anniversary of Palestinian Land Day.