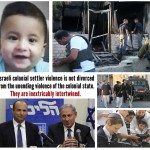 Judging by the reactions of everyone from Benjamin Nethanyahu (responsible for the deaths of over 550 kids in Gaza last year) to Ayelet Shaked (who called called Palestinian kids “little snakes”) to the US State Department (you know, the state that sponsors the murder of Palestinians) to the EU (which continues to be Israel’s number one trading partner) one would swear the the horrific burning to death of Palestinian toddler Ali Saad Dawabsh and the severe maiming of his family by illegal Israeli settler colonialists was an isolated and unpredictable incident, a bizarre aberration from some peaceful norm.

If actual fact, since 1st January this year there have been over 390 attacks by illegal colonial settlers on Palestinian people, property, agriculture and infrastructure – that’s an average of two attacks per day. And that’s not counting attacks by ‘official’ Israeli occupation forces, who we’re reading have today killed another young Palestinian at a demonstration at Qalandia checkpoint (according to the Israeli news website i24).

The violence of the illegal settlers is part and parcel of the structural violence of the Israeli occupation and colonial project in the Palestine-Israel region since 1947. And just as the impunity settler violence enjoys from the Israeli state emboldens such actions as last night’s murder, the impunity enjoyed by the Israeli state from the international community ensures that Israeli violence – ‘official’ and ‘unofficial’ – will continue to be perpetrated upon the people of Palestine, no matter how many crocodile tears are shed by the Israeli leadership, their US sponsors and EU benefactors. Israeli colonial settler violence is not divorced from the incessant violence of the colonial state – they are inextricably intertwined.

When governments refuse to take action for justice, civil society must. That is why we support and promote the global ‪‎Boycott‬, ‪Divestment‬ and ‪Sanctions‬ (‪‎BDS‬) movement against Israel until it ends its occupation, grants equal rights to its Palestinian citizens and allows the ‪Right of Return‬ for Palestinian refugees.