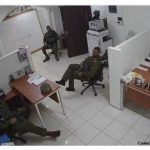 These organisations were designated as “terrorist entities” by Israel in October 2021, a move that has been openly rejected by nine EU states, including Ireland.

In the office of Al Haq, the soldiers tore to the ground an Irish flag which had been symbolically placed in recognition of Senator Frances Black’s Occupied Territories Bill.

The six organisations are Defense for Children International Palestine, Al-Haq, Addameer the Prisoner Support and Human Rights Association, the Union of Agricultural Work Committees, Bisan Center for Research and Development, and the Union of Palestinian Women Committees.

Ms. Micklethwaite condemned the raids, saying that “they represent a serious and dangerous escalation of decades of the Israeli state’s attempts to smear, silence and shut down Palestinian civil society, and to punish those human rights defenders who expose its crimes against the Palestinian people and work to hold it accountable for them.”

Ms. Micklethwaite continued, “from Ireland we send solidarity to our friends and colleagues in these human rights organisations; we salute their courage in standing against Israel’s regime of apartheid and repression, and commend their boundless commitment to freedom, justice and equality. We stand with the six.”

She also noted that, as per the Article II of the 1973 Apartheid Convention, “the Crime of Apartheid includes the ‘persecution of organisations and persons, by depriving them of fundamental rights and freedoms, because they oppose apartheid’.”

Ms. Micklethwaite concluded by demanding “concrete and meaningful action from the international community, including the Irish government, to hold Israel accountable for its crimes. Israel must face sanctions for its violations of international law and human rights abuses. The time for talk is over – failure to act now to punish Apartheid Israel will only ensure it commits further crimes against the Palestinian people.”