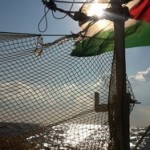 Update from Gaza Action Ireland (11:30 Sat 20 Oct): We’re now certain that Israeli commandos have taken over the Estelle and it is being towed to Ashdod. All reports at this stage originate with Israel, as we lost contact with the ship at 9.15am this morning. Therefore, we have no reliable information on the nature of the take-over or regarding injuries, if any.

Update from Gaza Action Ireland (23:55): We have just received news from the SV Estelle that 6 IDF ships are circling them: 5 small and 1 bigger. No radio contact has been made yet by the Israeli forces.

This indicates that an Israeli intervention against the 1920s-built tall sailing ship, the SV Estelle, is likely to occur soon, or overnight.

In advance of this threatened intervention, Fintan Lane of Gaza Action Ireland said: “We condemn this action as disgraceful. Israel has no right to hijack ships in international waters and its maritime blockade of Gaza has no legal basis. Those on board the SV Estelle have huge international support. We will continue to send ships to Gaza and will also examine other ways to breach this immoral and illegal siege. It cannot be allowed to go on. The consequence of this blockade is that 80% of people in Gaza are aid-dependent. This is a collective punishment by Israel on the Palestinian people of Gaza and is illegal under international law.”

Anonymous Israeli defence sources, cited by the Norwegian newspaper Verdens Gang, confirm that Israel intends to attack Estelle tonight, if the ship doesn’t change her course. The source states that Estelle will not be let closer to Gaza’s coast than 12 Nautical miles.

According to Fintan Lane of Gaza Action Ireland: “This maritime blockade is illegal under international law and it is unacceptable for Israel to issue such a threat. We call on the Irish government and the international community to speak out in support of the human rights activists on the SV Estelle. It must be allowed to deliver its humanitarian cargo and message of solidarity to the people of Gaza. Israel has no right to stop this ship.”

The Estelle is currently in international waters approx. 110 NM (Nautical Miles) from the shores of Gaza.

There is huge support in Ireland for the Estelle and, recently, 80 parliamentarians – from north and south – signed a statement in support of the mission of the SV Estelle and the Gaza flotilla movement. For the statement and full list of 80 Irish politicians, see: