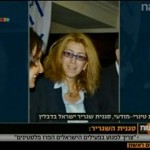 In an exposé by Israel’s Channel 10 News, it has been revealed that Israel’s Deputy Ambassador to Ireland, Nurit Tinari-Modai, advocates a campaign of intimidation, smears and falsification against Israeli human rights activists who campaign in solidarity with Palestinians, and suggests that “sexual identity problems” lie behind such activism.

Ms. Tinari-Modai, who is also the Culture Officer of the Israeli Embassy in Ireland and wife of the current Ambassador Boaz Modai, made the proposals in a diplomatic communiqué sent to the Israeli Foreign Ministry. According to the Channel 10 report, translated into English by Dena Shunra, Ms. Modai advocates working “directly against those Israeli activists, [to] humiliate and shame them”. She suggests publishing the names and photographs of Israeli activists to embarrass their family and friends, and implying that they are agents of Mossad to undermine trust between Palestinian, international and Israeli solidarity activists.

Ms Tinari-Modai’s cable says that “it is possible to obtain names of the Israelis… you have to try and hit their soft underbellies, to publish their photographs, maybe that will cause embarrassment from their friends in Israel and their family, hoping that local activists would understand that they may actually be working on behalf of Mossad [Israel’s spy agency].”

Ms Tinari-Modai also goes on to make the bizarre claim that “the activity of those activists against the state is, in my evaluation, not necessarily ideological, but grounded in psychological reasons (generally of disappointment with the parents, [or] sexual identity problems).”

Martin O’Quigley, Chairperson of the Ireland-Palestine Solidarity Campaign (IPSC) condemned the proposals saying, “this type of behaviour is indicative of the mindset of apologists for Apartheid Israel. They have no legal, political or moral arguments. Instead of questioning Israel’s illegal actions and occupation, they opt to attack human rights activists’ characters and motivations. Such tactics fit with the recommendations of the Reut Institute, an Israeli government-linked think-tank, which advocates a campaign of ‘sabotage’, ‘attack’ and ‘naming and shaming’ against Palestinian solidarity activists. While the Israeli Foreign Ministry has distanced itself from the proposals, calling them “deranged”, it is hard to believe this is a serious disavowal – more likely it is because the cable was leaked to the press and has become a political embarrassment.”

Mr. O’Quigley called for the Irish Government to take action on the issue. “That these kind of proposals are being seriously touted by the Israeli Embassy in Ireland is incredibly worrying, and the Irish government should, at the very least, demand Ms. Modai be withdrawn immediately. Support for such intimidatory behaviour, interference and personalised attacks on human rights activists by a foreign diplomatic mission should be unacceptable in a democratic and sovereign country.”

Mr. O’Quigley concluded by saying that “in recent weeks, there has been an unprecedented attack on both the campaign for a cultural boycott of Israel and the Ireland-Palestine Solidarity Campaign (IPSC) in the Irish media, much of it based on inaccurate and misleading reporting. These attacks have often been highly personalised against individual IPSC members. While this would fit with the modus operandi of the Israeli Embassy, whether or not the embassy has influenced such reporting is impossible to say. However, there is no doubt that the Israeli Embassy can only have been happy with the skewed misrepresentation of the campaign.”

Ali Abunimah, Palestinian author and human rights activist noted that “Nurit Tinari-Modai’s emphasis on alleged “sexual identity problems” of those to be smeared, indicates an innate homophobia that is at odds with Israel’s efforts – known as pinkwashing – to portray itself as supportive of the rights of people who identify as LGBTQ.”

The Channel 10 News report (text and video in Hebrew only) can be viewed here: http://news.nana10.co.il/Article/?ArticleID=903347

A professional translation of the report is published here on Electronic Intifada: http://electronicintifada.net/blogs/ali-abunimah/israels-dublin-embassy-planned-smear-palestine-activists-sexual-deviants-and

A second translation from Hebrew can be found here on the Israeli website 972 Magazine: http://972mag.com/deputy-ambassador-to-ireland-pro-palestinian-activists-have-sexual-identity-problems/48180/

For more information on the Reut Institute, see: http://electronicintifada.net/tags/reut-institute