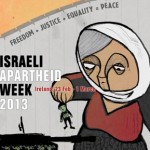 Now in it’s 9th year, Israeli Apartheid Week is an annual international series of events (including rallies, lectures, performances, films, multimedia displays and protest actions) held in cities and campuses across the globe. Last year was incredibly successful with over 215 cities taking part. IAW aims to raise awareness about Israel’s apartheid policies towards the Palestinians and to build support for the growing campaign of Boycott, Divestment, and Sanctions (BDS) against Israel. This year the Ireland Palestine Solidarity Campaign is proud to be hosting a series of events in Ireland.

IAW 2013 takes place following several years of incredible successes for the BDS movement on the global level. Our events will highlight the many injustices that continue to make BDS so crucial in the struggle against apartheid and for freedom, justice, equality, and peace. For international IAW events see the Israeli Apartheid Week 2013 website here.