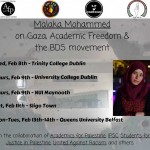 TCD Students for Justice in Palestine, United Against Racism, Academics for Palestine, the Ireland-Palestine Solidarity Campaign and others are proud to host an Irish speaking tour featuring Palestinian student and BDS activist Malaka Mohammed between Wednesday 8th and Tuesday 14th February 2017 in Dublin (TCD & UCD), Maynooth (NUI), Sligo and Belfast (QUB). While most of the talks will take place on university campuses, they are open to all interested people.

From Gaza, Malaka Mohammed is a Palestinian PhD candidate at Exeter University, Former National Union of Student Executive Committee member and a Boycott, Divestment and Sanctions (BDS) campaigner.  Her academic work focuses on Palestinian political prisoners in Israeli jails (with special focus on hunger strikes), on the concept of gender in hunger strikes and on grassroots resistance in Palestinian society.