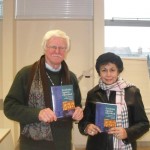 Press Release from Academics for Palestine: Irish academic researchers collaborated in EU-funded projects with Israeli counterparts who make drones, develop high-tech weapons and engage in “counter-terror” activities with the Mossad, it was revealed today.

In all,  Irish universities have collaborated with Israel in 257 projects to date, seven of them listed as “security” and  13 as “aerospace”. These EU research programmes are administered by Irish Commissioner Máire Geoghegan-Quinn.

The information on Irish-Israeli research links was gathered through the examination of publicly available EU documents by members of Academics for Palestine (AfP), a new organisation launched today in Dublin.

The group supports an academic boycott against Israel. Its chair, Jim Roche, said the daily discrimination inflicted on Palestinian academics was enough to justify such a boycott, but added: “The revelations of Irish academia’s collaboration with companies closely linked to Israel’s military-industrial complex are truly shocking.

“What is surprising is that a non-European country, Israel, actually receives more research and development funding from the EU than many European countries do,” Roche said today. “It is not just Israeli universities that avail of this funding, but Israeli security and military companies – and they are often the lead partner in a research consortium.”

“This is, by not very roundabout means, the EU funding the Israeli occupation apparatus,” Dr Andy Storey, UCD lecturer in politics and international relations, said at today’s launch.

Researchers at the University of Limerick collaborated with an Israeli security company, Athena GS3-Security Implementations Ltd, on an EU-funded programme worth almost €4 million from April 2009 to March 2011. (The project researched digital support systems for first responders.) Athena, on its website, claims to be a world leading counter-terror advisory group with indigenous expertise from the Mossad and other elite Israeli counter terrorist units.

UL also partnered with Israel Aerospace Industries (IAI). IAI are key players in the development of security and surveillance for Israel’s separation wall, deemed illegal by the International Court of Justice (ICJ), the principal judicial organ of the United Nations.

Other academics, at Trinity College Dublin, have worked with Israeli drone manufacturers Elbit Security Systems and two other Israeli firms in an airport security project, still ongoing, and on a separate project with Israel’s notorious International Security and Counter-Terrorism Academy.

“Some Irish universities may be effectively  contributing to the denial of Palestinian human rights and academic freedom by collaborating with these Israeli security companies in EU-funded FP7 and Horizon 2020 programmes paid for by European, including Irish, taxpayers,” Roche said.

138 Irish academics have signed a pledge, organised by AFP, to boycott such collaboration with Israeli institutions until Palestinian rights are respected.

The signatories come from a wide range of disciplines and include many well-known names, such as Seamus Deane, Ailbhe Smyth, Luke Gibbons, Ronit Lentin, Joe Cleary, Kieran Allen, Kathleen Lynch, Tadhg Foley, Terrence McDonough and Helena Sheehan. At least one of the signatories has previously withdrawn from an EU-funded project because of Israeli involvement. The full list of signatories can be viewed here.

Dr Ghada Karmi, a Palestinian doctor of medicine, scholar and lecturer at the University of Exeter, emphasised that the international campaign for boycott, divestment and sanctions (BDS) does not target Israeli individuals but institutions. Far from being a threat to academic freedom, she said at today’s launch, BDS affirms its importance for Palestinians.

“The recent endorsement of the boycott campaign by the 5,000-member American Studies Association in the US, along with positive moves by the Modern Language Association and the controversy over Scarlett Johansson, showed that BDS is now very much part of a mainstream international debate,” Dr McCarthy said today.

“The US, EU and other states have protected Israel and financed its occupation ever since 1967, making it impossible to resolve the conflict through the UN or international diplomatic channels,” Prof Haim Bresheeth, an Israeli film-maker and scholar, said. “It puts a special responsibility on international civil society, and BDS is its main tool to resolve the conflict in a just and peaceful way.”

“In response to the call from Palestinian civil society for an institutional academic boycott of Israel, we pledge not to engage in any professional association with Israeli academic, research and state institutions and with those representing these institutions, until such time as Israel complies with international law and universal principles of human rights.”

Links to Projects Referenced in this Press Release