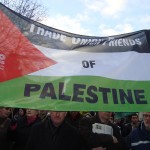 At its Biennial Delegate Conference this week in Killarney the Irish Congress of Trade Unions, representing the entirety of the Irish trade union movement across the island, demonstrated its continued commitment to Palestinian solidarity and the Boycott Divestment and Sanctions (BDS) campaign.

As well as the two agenda motions on Palestine conference also considered an emergency motion condemning the sabotage of the Irish ship MV Saoirse as it prepared to breach the illegal Israeli blockade. All motions were passed without any opposition whatsoever, clearly indicating the strong support for the Palestinian people and for BDS in the Irish trade union movement. Prior to the motions being held Trade Union Friends of Palestine distributed free to all delegates copies of their latest publication, a pamphlet on the Histadrut, as well as copies of the trade union produced Boycott Israeli Goods poster.

The Unison motion, coming from one of the largest affiliate unions in Ireland, and moved by Patricia McKeown a recent President of ICTU, referred to the plight of the Palestinian people remaining one of being subject to occupation, colonialism and apartheid. It committed ICTU to work with Trade Union Friends of Palestine to help mobilise and coordinate a mass civil society BDS campaign in Ireland. The motion also committed ICTU to organise a series of divestment and sanctions seminars, in both jurisdictions in Ireland. This motion as well as the Derry Trades Council motion drew attention to the suffering of the people of Gaza, and declared support for all those involved in the Free Gaza campaign and the attempts made by land and sea to breach the illegal blockade.

The motion from Derry Trades Council also addressed the theme of ICTU taking the lead in mobilising support from all sectors Irish civil society. It called for ICTU to promote an ‘Ireland Declaration for Palestine’ that calls for an end to Israeli human rights abuses, the implementation of UN resolutions and support for BDS. The Derry motion welcomed the ongoing work within ICTU to educate its rank and file about the Israeli oppression of the Palestinian people. The motion called for information also to be made available, as part of this educational campaign, on the role of key Zionist institutions like the Jewish Agency and the Jewish National Fund. The motion also welcomed the campaign to have the charitable status of the Jewish National Fund withdrawn.

In passing the Derry motion the ICTU conference also recorded its deep concern at the alarming deterioration of Palestinian human rights in East Jerusalem, and noted Richard Falks’ comment that this could only be described as a form of ethnic cleansing. Conference also applauded all those Palestinians, Israelis and international human rights activists who ‘despite being subject to increasing Israeli state surveillance and repression, struggle to uphold the rights of Palestinians’. Conference applauded in particular the heroic activity of the Bil’in Popular Committee in its weekly protest action against the building of the Separation Wall and the seizure of Palestinian land.

The emergency motion condemning the sabotage of the Irish Ship to Gaza, the MV Saoirse, was submitted by seven of the leading trading unions in Ireland, indicating the united response of the Irish trade union movement and their huge anger at the Israeli government. The motion considered the sabotage of the MV Saoirse as a breach of Ireland’s sovereignty as well as a threat to Irish lives. It called on the Irish government to raise this issue at the highest level in the UN and in the European Union, and also to challenge the Israeli Ambassador. It also called for the expulsion of Israel from the OECD and an end to the preferential EU trading agreement with Israel. Conference also drew attention to the comments of the Tanaiste (deputy Prime Minister) and Minister for Foreign Affairs, Eamon Gilmore, when he told the Israeli Ambassador that ‘Israel must show all possible restraint and avoid any use of force if attempting to uphold the naval blockade’. Conference reminded the Irish Government ‘that this Israeli blockade of Gaza is itself a breach of international law.’ Conference had earlier been addressed by Tanaiste Gilmore, and witnessed an extensive protest when delegates dispersed throughout the conference hall held up copies of the trade union endorsed Boycott Israeli Apartheid poster as well as banners and placards condemning collusion with Israeli war crimes.

The day before the motions came to the floor, in a packed special meeting on Palestine organised by ICTU (people had to be turned away), delegates heard from Rafeef Ziadah speaking on behalf of the Palestinian Trade Union Coalition for BDS. ICTU had already established links with the PTUC-BDS and had welcomed its formation in a message of solidarity send to PTUC-BDS’s founding conference. Ziadah spoke at length about the conditions of Palestinian workers and the daily struggle of the Palestinian people attempting to survive under the harsh conditions of the occupation. She spoke about the rapidly increasing mobilisation of the international trade union movement against Israeli injustice and highlighted some of the major developments that had taken place. She identified as one of these the decision of ICTU in 2007 to adopt a policy of BDS making it the second congress in the world (after Cosatu) to do so. She thanked ICTU for its commitment to BDS, and urged them to move forward with implementing their policy.