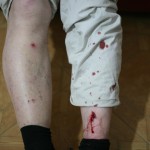 This evening, Friday 3rd May, Irish cameraman Tommy Donnellan was shot in the back, leg and arm by the Israeli military while filming a protest in the Palestinian village of Silwad in the occupied West Bank. Mr. Donnellan, who is from near Ballinasloe in Galway travelled to the West Bank in February. Today he sustained three wounds from a rubber-coated steel bullets which punctured his left leg, and bruised his back and upper right arm.

This is the third time Mr. Donnellan has been injured by the Israeli military in as many months. On 19th March, he sustained a wound from a rubber-coated steel bullet which punctured his upper right arm while filming a protest in Nabi Saleh. Last Friday 26th April he recieved a slight injury when he was struck by a concussion grenade in the right leg.

Iyad Burnat, an activist in the West Bank village of Bil’in said: “Tommy is seeking medical help in Ramallah hospital for the hole in his left leg. Following the injury to Tommy’s right leg from a stung grenade that was thrown at him last Friday in Silwad, and the injury he received in his right arm in March, it’s clear that the Israeli occupation forces are targeting Tommy.” According to the International Solidarity Movement in Palestine, around four hundred Palestinians, joined by a handful of international activists, participated in today’s weekly demonstration organised by Silwad and Deir Jarir villages on their lands, upon which settlers from Ofra set up an illegal outpost more than four weeks ago.

This outpost consist of caravans and huts situated on Palestinian farm land that the residents of Silwad, Deir Jarir, Taybeh and Ein Yabrud have been denied access to for over a decade. A settlement outpost is the first move made by settlers when conducting a land-grab in the West Bank; establishing temporary buildings which are protected by the military and eventually made permanent, in order to establish ‘facts on the ground’ and steal Palestinian land.

This is the second weekly demonstration that the villages of Silwad and Deir Jarir have held together to protests the land theft and settler violence and more demonstrations are expected to be organised in the following weeks.