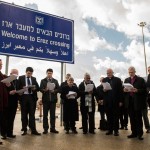 ‘Everything people do is controlled by the state of Israel … No matter where you go, you see the remains of the war of 2014.’

This is the description by an Irish bishop of the life-sapping reality of daily life for the people of the Gaza Strip as they deal with ongoing occupation and biennial mass attacks.

The Irish Catholic Bishop of Dromore, John McAreavey is currently on a ten day visit to the occupied Palestinian territories and Jordan.

Speaking to RTE Radio 1’s News At One, following two days in Gaza the Bishop also repeated the often-used description of Gaza as being the “the biggest open prison in the world”.

Clearly rejecting the notion of a divide between Christians and Muslims in terms of the oppression they face at the hands of Israel, Christians, the bishop said: “share the same problems as the rest of the people in Gaza, and the striking thing about Gaza itself it still carries the scars of war to an incredible extent. No matter where you go you see the remains of the war of 2014.”

Bishop McAreavey also said that the visit made him “aware of just the level of poverty, because when you spend some time in Israel, which is a first world country, and then you go into Gaza, it’s almost like going back 50 or 100 years because there’s a level of just underdevelopment there that you’re immediately aware of.”

The Bishop stressed the importance of personal contact with Palestinians, telling RTE Radio 1 that “I also had a long conversation with a lawyer, and in a sense, it’s only when you begin to talk to people and listen to their experience that you begin to realise what it is like for the people to live in Gaza.”

Concluding his interview, the Bishop indicated that upon his return he will be raising the  issue of Palestine with the Council for Justice and Peace and the Department of Foreign Affairs. “We will be raising our voice for the recognition of Palestine,” the Bishop said, and further stated that “it would be a tremendous sign of the Irish people’s respect for the dignity of the people of Palestine if in fact the Irish government were to give that recognition.”

The Ireland-Palestine Solidarity Campaign will be writing to Bishop McAreavey thanking him for his plain speaking in highlighting these vital issues, and also pointing out that the we believe that the Churches in Ireland should listen to the voice of the Boycott, Divestment and Sanctions National Committee (BNC), the largest Palestinian civil society coalition of over 200 NGO, trade union, artistic, political and faith groups which has called for international religious organisations to support the global BDS campaign. The BNC has clearly stated that:

“recognition of Palestinian statehood is clearly insufficient, on its own, in bringing about a real end to Israel’s occupation and colonial rule. Neither will it end Israel’s decades-old system of legalized racial discrimination, which fits the UN definition of apartheid, or allow the millions of Palestinian refugees to return to their homes of origin from which they were violently uprooted and exiled.”

The Kairos Palestine document ‘A Moment of Truth: A word of faith, hope, and love from the heart of Palestinian suffering’, issued by Palestinian Christian leaders and activists, calls for support for the BDS strategy, supporting “a system of economic sanctions and boycott to be applied against Israel. We repeat once again that this is not revenge but rather a serious action in order to reach a just and definitive peace that will put an end to Israeli occupation of Palestinian and other Arab territories and will guarantee security and peace for all”. Kairos sees “boycott and disinvestment as tools of non violence for justice, peace and security for all.”

The IPSC welcomely invites Bishop McAreavey, the Catholic Church, and all Churches and faith groups in Ireland, to join this growing movement for freedom, justice, equality and peace in the Palestine-Israel region.