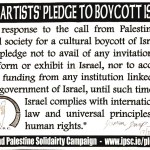 Today, 12th August, is the fourth anniversary of the launch of the Irish Artists’ Pledge to Boycott Israel, which now boasts more than 460 signatories from all walks of the creative and performing arts.

The pledge reads as follows:

“In response to the call from Palestinian civil society for a cultural boycott of Israel, we pledge not to avail of any invitation to perform or exhibit in Israel, nor to accept any funding from any institution linked to the government of Israel, until such time as Israel complies with international law and universal principles of human rights.” – For the full list of signatories, see here. Initiated by the Ireland-Palestine Solidarity Campaign (IPSC), the pledge was launched with a concert in Dublin’s Meeting House Square in 2010 and has been described by the Palestinian Campaign for the Academic and Cultural Boycott of Israel (PACBI) as “a ground-breaking initiative”.  PACBI is one of the leading Palestinian civil society organisations behind the call for a campaign of Boycott, Divestment and Sanctions (BDS) against Israel.

From the original 140 artists, the list has grown to include over 460 novelists, poets, painters, sculptors, film-makers, dancers, composers, performing musicians and others, including many members of Ireland’s state-sponsored academy of artists Aosdána. Around 200 of these artists have signed the pledge during the course of Israel’s latest assault on the people of Gaza which began on July 8th. Signatories range from some of Ireland’s most internationally known figures to artists starting out on their careers, who know that they risk defamation and ostracism by Israel’s advocates, particularly in the US.

Raymond Deane, cultural liaison officer of the IPSC said “Sadly, this pledge remains as necessary as when it was launched four years ago. Israel’s latest murderous attack on Gaza that has killed over 2,000 people, mostly civilians, proves that it is not interested in peace. Western governments’ failure to sanction Israel prove that they are not interested in justice. Therefore it remains incumbent upon civil society to take action, and this pledge allows people from the artistic community to take a stand in solidarity with the Palestinian people. Indeed, that around 200 artists have added their names since Israel launched its recent assault on the largely defenceless population of Gaza last month shows that our government’s inaction on the issue is deeply at odds with all levels of Irish public opinion.”

Mr. Deane also pointed out that “These artists are aware of the Israeli Foreign Ministry’s 2005 statement that ‘We see culture as a propaganda tool of the first rank, and…do not differentiate between propaganda and culture.’ By taking this pledge, these artists are refusing to allow their art to be exploited by an apartheid state that disregards international law and universal principles of human rights, but look forward to the day when normal cultural relations can be re-established with an Israel that fully complies with such laws and principles.”

Mr. Deane concluded by calling on more Irish artists to take the pledge, saying “If you are an Irish artist or an artist based in Ireland and would like to add your signature, please see www.ipsc.ie/pledge.”