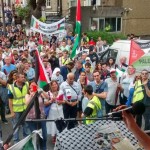 Decades of treating both the the coloniser and the colonised as ‘equals’ in a ‘conflict’ has produced nothing but an entrenchment of Israeli colonialism. It’s time for a new approach from the Irish state. Palestinians are asking for an arms embargo on the apartheid state, we ask the Irish government listen to them!

Sign the petition calling for an end to the Irish arms trade with Israel by clicking here.

Clare Daly TD: To ask the Minister for Defence the steps he has taken to ensure that the Irish Defence Forces cease to engage in any arms trade with Israel. [25094/15]

Clare Daly TD: I do not believe that the US is responsible for everything. The state of Israel is responsible for quite a bit, and that is the subject matter of my next question. The Minister is aware that the Ireland Palestine Solidarity Campaign launched a campaign to try to ensure that Ireland would play a role as a neutral country in delivering an arms embargo on Israel. As the Minister is aware, we have bought and received a lot of military hardware from the Israelis. Does the Minister plan to end that, and what position has he advocated in the EU on the matter?

Minister for Defence, Simon Coveney: I have previously outlined to the House the position with regard to the procurement of defensive equipment by my Department. I have also explained the scale and type of such equipment that the Department has acquired from Israeli companies in recent years and the purpose of such acquisitions, which is to afford the greatest possible force protection and operational effectiveness to Irish Defence Forces personnel. I can go through what we have bought, most of which is defensive equipment not offensive equipment. The principle of competitive tendering for Government contracts must be used by the Department of Defence for the acquisition of defensive equipment for the Defence Forces under EU law. Central to those procedures is the requirement to allow fair competition between suppliers through the submission of tenders following advertising of the tender competition, usually on the eTenders website, in line with the EU directive on the procurement of defence and security equipment.

The matter of barring Israeli companies from entering tender competitions for the provision of military goods would be akin to Ireland unilaterally placing an embargo on such goods from Israel and this raises, inter alia, serious implications for Irish foreign policy which are outside my remit as Minister for Defence. As the Deputy is aware, trade policy and market access are largely EU competencies and any restriction or ban on imports from any particular country would have to be a concerted EU decision. The manner in which the Department of Defence procures both goods and services remains consistent with international best practice and is in line with EU and UN decisions on trade embargoes.

Clare Daly TD: In June 2013 Ireland signed up to the Arms Trade Treaty, which prohibits a state from authorising arms exports where it has knowledge that the weapons will be used in the commission of genocide, crimes against humanity and breaches of the Geneva Convention among others. Ireland has bought almost €15 million worth of arms and military components from Israel in the past decade and Irish companies have exported approximately €6 million worth of products. The Israeli regime, as the Minister is aware, has killed more than 9,000 Palestinians, including more than 2,000 children since 2000. It is not about the process of us being involved in trade with the state. It is the fact that we are involved with Israel at all. The Government has participated in embargoes and sanctions against other authorities. The situation is sufficiently serious for such action to be taken. Positive neutrality would ensure a cessation of such trade. It is absolutely appalling that individuals, the state of Israel and arms manufacturers in Ireland profit from the killing of Palestinians. The Minister should really use his position inside the EU and the UN to advocate an embargo throughout the EU, and not just sit back and say it depends on what the EU does. What position does the Minister advocate inside those organisations to deliver that result?

Minister for Defence, Simon Coveney: I have been using my position to advocate solutions to what is a very entrenched and difficult relationship and problem between Israel and Palestine. I do not believe that advocating for the introduction of an embargo or sanctions on Israel, or Ireland unilaterally doing so, would help the process. It is not true to say that Ireland unilaterally implements embargoes or trade sanctions on other countries. When we do that, we do it as part of the EU or the UN. Deputy Daly knows that.

People should understand the kind of equipment we are talking about, which is X-ray equipment for explosive ordnance disposal duties, which is hugely important for Irish troops abroad; helmets and personal protection; an artillery fire control system; unmanned aerial vehicles, which again is hugely important in terms of the protection of our troops; surveillance and targeted acquisition suites for four light tactical armoured vehicles, which is the kind of system we are using in our armoured vehicles abroad; and ground surveillance radar systems.

Primarily, we are talking about equipment that helps to protect our troops in the field and we have gone through the proper tender process to acquire it.

Clare Daly TD: It is not about what we are buying, it is about who we are buying it from and who is profiting from it. The reality is that the Minister said sanctions will not help but talking nicely has not helped. He had no problem supporting sanctions against Ukraine, even though a much smaller number of people have been killed there than in Palestine. The reality is that Israel is unlawfully occupying Palestinian land and is breaching its international legal and humanitarian obligations. Ireland should be to the forefront in advocating an end to that process. The double standards are in place again. The Minister cannot impose sanctions against Israel but he can against Ukraine and Russia. All we are looking for is consistency in that regard. It is just not good enough.

Pádraig MacLochlainn TD: I support 100% the issues raised by Deputy Clare Daly. How long are we going to do business with the military apparatus of the Israeli state, considering that 5% of Palestinian land remains in the hands of the Palestinians? The Oslo [process] is in tatters. The settlements continue. Jerusalem is—–

Pádraig MacLochlainn TD: It is shameful that this type of apparatus is—–

An Ceann Comhairle, Seán Barrett: Will the Deputy please resume his seat?

Pádraig MacLochlainn TD: Get it [arms imports] from somebody else.

Minister for Defence, Simon Coveney: I think the Deputy is missing the point, with respect. The point I am making is that if embargoes are to be imposed, it needs to be a decision at EU level. Ireland’s position in relation to a two-state solution as regards Israel and Palestine is very clear and has been articulated on many occasions. Whether it is the Minister for Foreign Affairs and Trade, or myself, the Taoiseach or others, we are strongly advocating, and Ireland is very much part of the debate around how the European Union can be of more assistance, in terms of getting a lasting peace process and a lasting solution in that part of the world. Our Defence Forces personnel put their lives at risk to try to do it as well. Anybody who suggests that Ireland is not committed to trying to find ways of delivering lasting peace in the Middle East needs to look at the number of Irish troops who, unfortunately, have paid the ultimate price in places such as southern Lebanon trying to do that.

An Ceann Comhairle, Seán Barrett: I thank the Minister.

Minister for Defence, Simon Coveney: We are committed to trying to get an outcome for people who for far too long have been living in misery in that part of the world. I do not personally think that those efforts will be assisted by the kind of approach that is being proposed.