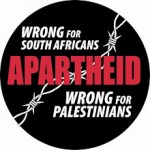 The following letter was published in the Irish Times on Monday 4th June 2012. The impressive list of individual and organisational signatories is indicative of the widespread domestic and international support that the Boycott, Divestment and Sanctions campaign, and the IPSC’s promotion of this campaign, enjoys. The publication came after a month of sustained attacks in the Irish media against the IPSC and the Palestinian call for a cultural boycott campaign against Israel.

Sir, – We wish to express our support for the Palestinian call for a campaign of Boycott, Divestment and Sanctions (BDS) against Israel until it abides fully by its obligations under international law and the Palestinian people enjoy the fruits of freedom, justice and equality.

The campaign for a cultural boycott of Israel is an important and integral aspect of this strategy as the Israeli state seeks to use culture, in particular, to whitewash it’s record of occupation, apartheid and war crimes.

We salute the courage of the more than 200 Irish artists who have signed a pledge not to perform in Israel, and support the efforts of the Ireland-Palestine Solidarity Campaign (IPSC) to promote this non-violent campaign. – Yours, etc,