Ireland latest EU state to defend the Right to BDS 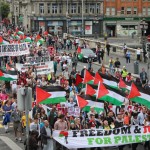 In another blow to the Israeli campaign to criminalize Palestine solidarity activism, the Irish government has affirmed that the global boycott, divestment and sanctions (BDS) movement represents a “legitimate” means of protest “intended to pressure Israel into ending the occupation.”

In the Irish parliament on Thursday, foreign minister Charles Flanagan stated that “while the government does not itself support such a policy,” the BDS movement holds a “legitimate political viewpoint” and that the government does “not agree with attempts to demonize those who advocate this policy.”

This is the second major setback Israel has suffered this week to its campaign to delegitimize and criminalize the global movement within the European Union and other Western states.

Ireland is the third EU government to make such a statement in recent months.

Read the rest of this story on the Electronic Intifada website here.