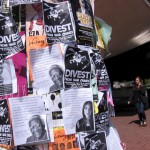 We would like to express our wholehearted support for the University of California Irvine student government’s stand for human rights and justice, in the form of its November 2012 divestment resolution. This resolution is a firm, clear sighted statement based on a commitment to justice and an understanding of the importance of ensuring that international companies comply with human rights and international law.

The companies mentioned in the resolution all have an ongoing record of complicity in illegal Israeli practices in the occupied Palestinian territories. They are all engaged in well-documented and flagrant breaches of basic human rights norms, and this resolution makes the important point that they should not be allowed to profit from these violations.

We would like to focus on the Irish company mentioned, CRH and its complicity in violations of human rights law. CRH owns 25% of the Israeli company Mashav, which is the holding company for Nesher cement. Nesher has supplied most of the cement to the illegal Separation wall, the Jerusalem Light Railway project, the illegal settlements in the West Bank and the network of apartheid settler-only roads, underpasses, bridges and tunnels in the occupied Palestinian territories. As such they are complicit in clear violations of the 2004 International Criminal Court ruling on the Separation Wall, as well as a host of other international and human rights legislation. In Ireland, there is an active campaign calling for churches, unions and pension funds to divest from CRH, and so we would strongly urge UC Irvine to divest from this company.

In Ireland, we know of the importance of such divestment campaigns to bring about peace and justice. The Mac Bride Principles were a US-wide commitment that American city and state funds would not go to companies in Northern Ireland which practiced discrimination or other forms of human rights abuses. The application of these principles played a major part in combating discrimination and bringing justice to Northern Ireland. This divestment campaign is part and parcel of this noble tradition, and we salute UC Irvine student body for carrying forward the campaign, and wish you every success in implementing this divestment resolution.