IPSC Statement on the Israeli elections: No support for any wing of Zionism 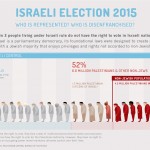 Some well-meaning people have been wondering if the Ireland-Palestine Solidarity Campaign are “supporting” the Zionist Union in the Israeli elections, asking if we feel that perhaps a change of government from the ‘Rightwing Zionist’ Netanyahu-Lieberman coalition to a so-called ‘Liberal Zionist’ Herzog-Livni coalition will mean a dramatic change of Israeli establishment policy toward Palestinians. Other self-declared supporters of Palestinian rights have openly stated their desire for a victory of the Zionist Union coalition believing it will be a step towards a solution.

The simple answer is “No. The IPSC is not supporting the Zionist Union, or any other Zionist party running in the Israeli elections.” Indeed, the IPSC is independent of all political parties and factions, be they Irish, Palestinian or Israeli – though of course individual members and supporters all hold their own opinions on political parties and organisations.

However, it is worth looking more closely at the key players in this ‘Zionist Union’ coalition and their policies simply becasue they have aroused the interest of people who wish to see a just peace in Palestine.

Naturally the first thing to note is the name: Zionist Union. As we know ‘actually existing Zionism’ is a racist settler-colonial system built upon the ethnic-cleansing of over 1 million indigenous Palestinian people. It imposes apartheid upon the Palestinian people, routinely and flagrantly violates international law, steals land, builds illegal settlements and frequently engages in murderous campaigns of war crimes against a captive population. However, looking at the calibre of the Zionist Union leadership, it is not unsurprising that they chose to associate themselves with this settler-colonial ideology…

Isaac Herzog has chided Netanyahu for not killing enough Palestinians quickly enough last summer. In an advert which, according to the Jerusalem Post, “attacked Netanyahu from the Right” Herzog complained that: “You waited, stalled and hesitated… You had to hit them on the head and on time. You failed.” Furthermore, while Minister for Housing in 2005, Herzog continued building illegal settlements in violation of both the ‘Road Map for Peace’ and, more importantly, the Geneva Convention, and has signalled his intention to keep building within illegal settlement blocs if elected.

His coalition partner Tzipi Livni, who is slated to be deputy PM if they are victorious, was Foreign Minister in the previous Kadima-Labor[1] coalition between 2006-09. During her tenure she oversaw the savage butchery of the Operation Cast Lead attack on Gaza in winter 2008-09 which killed over 1,400 Palestinians, including more than 350 children. During that assault, in which she was a key decision maker, she stated that the operation was punitive in nature and had successfully “restored Israel’s deterrence” and that when an enemy attacks Israel “it responds by going wild – and this is a good thing.” Collective punishment is, of course, a war crime, although Livni’s view should come as no surprise for someone who is on record as saying “I am against law – international law in particular. Law in general.”

Meanwhile, Amos Yadlin, the candidate for defence minister, largely agrees with Netanyahu when it comes to desiring an attack on Iran. Among the options listed by him are: “a secret operation that no one takes responsibility for against the (nuclear) program; the fourth strategy is regime change; and the fifth, a kinetic attack”.

So-called ‘Liberal Zionism’ is not a better option for Palestinians than its rightwing counterpart. It was Liberal Zionism which oversaw the forcible displacement and dispossession of over 750,000 Palestinians during the 1947-48 Nakba. Liberal Zionism was responsible for the 1967 conquest and occupation of the West Bank and Gaza and ensuing displacement of a further 300,000 Palestinians. Liberal Zionism gave birth to the illegal settlement project, instituted the ‘broken bones’ and mass killing policies of the first intifada, pushed the continued settlement building and other provocations during the Oslo process, and was responsible for the firing of over 1.3m bullets at Palestinian demonstrators before a single Israeli civilian was killed in the second intifada., And let it never be forgotten that Liberal Zionism planned and executed the above mentioned Operation Cast Lead butchery upon the people of Gaza – to name but a few of its historical and more recent crimes.

If anything Liberal Zionism is more pernicious than rightwing Zionism – at least the right is more honest about its anti-Palestinian agenda. As dissident Israeli journalist Gideon Levy has pointed out in a piece (A Labor win will only entrench the occupation) that is worth reading in full, “Herzog and Livni will delude the world”, they have “no intention of reaching an agreement” and the “occupation will become even more entrenched”.

Palestinian political analyst Diana Butto says that a “Zionist Union government is likely to come up with a more polished presentation of the same brutalities… business as usual.” In other words, if the foot on your throat is simply wearing a different boot – nothing much has changed. She also points out that the Liberal Zionist “parties continue to support Israeli racism as evidenced by their support for laws that discriminate against Palestinians in Israel. Only last week, when Israel’s Foreign Minister, Avigdor Lieberman, called for the beheading of Palestinians in Israel whom he deemed disloyal to the state, none of the major political parties — Herzog and Livni’s included — spoke out against him and his racism, brazenly directed against some 20 per cent of the country’s citizenry.”

Therefore, no matter who emerges victorious later today, Palestinians will not celebrate – and neither should those of us committed to aiding the Palestinian struggle for their rights. Instead of giving support, however minimal or critical, to any wing of the Zionist project, the only thing we should be doing is continuing to build the Boycott, Divestment and Sanctions (BDS) campaign as Palestinian civil society has asked us, to play our role in helping Palestinians to secure their freedom, justice and equality.

[1] Tzipi Livni’s current party, Hatnuah, was a split from Kadima. The latter has since dissolved itself.

For those interested in learning more about the Israeli elections, here are some useful links:

Institute for Middle East Understanding – ‘Israeli Election 2015: Who Is Represented? Who Is Disenfranchised?’

The Jerusalem Fund – ‘Israeli Elections 2015: A Further Look at the Candidates’

Alternative Information Center – ‘We aren’t following Israeli elections, why are you?’

Al Shabaka – The Palestinian Policy Network – ‘The Joint List in Israel’s Elections: Palestinians in from the Cold?’

Gideon Levy, Haartez – ‘A Labor win will only entrench the occupation’