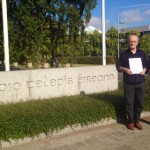 On Wednesday 10th September members of the Ireland-Palestine Solidarity Campaign handed in a 10,000 strong petition to RTÉ, Ireland’s national broadcaster, calling for more balanced, comprehensive and consistent coverage of the situation in the Palestine-Israel region. The petition calls on RTÉ:

“to cease ignoring the Palestine issue in both news coverage and commentary. RTÉ withholds from Irish people all information about the Israeli army’s daily persecution, harassment and even killing of Palestinians (including children) within the occupied West Bank and the besieged Gaza Strip. RTÉ has been silent about successive waves of hunger strikes among Palestinian prisoners in Israeli prisons, many of them detained without trial, and many of them children. The Palestine issue is at the heart of conflict in the Middle East, hence its resolution is an essential precondition for world peace. RTÉ, by its non-reporting of the issue, is depriving Irish people of information and understanding. RTÉ: please break your silence on Palestine.”

IPSC Vice Chairperson Fatin Al-Tamimi and Raymond Deane, IPSC Cultural Liaison and initiator of the petition met with Kevin Bakhurst, Director of News and Deputy Director General of RTÉ in RTÉ’s headquarters in Dublin. Presenting the petition, they asked for more comprehensive and balanced coverage of the Palestine issue, placing it in its historical, political and legal context, and at all times balancing Israeli (or Zionist) spokespersons with Palestinians (or defenders of Palestinian rights). The purpose of our meeting with RTÉ was to offer cooperation, not confrontation, and thus the IPSC proposed establishing a channel of communication with RTÉ whereby we could make available both our expertise and our extensive list of contacts. The IPSC media team contains a wealth of people with expertise in journalism, education and international law, and produces professional and factual information for the media. We can also offer an extensive list of contacts – Palestinians, Israelis and internationals – who are experts on the subject, from members of the Palestinian, Israeli and Irish parliaments, to human rights experts, legal experts and professors all over the world.

After leaving the meeting, Mr. Deane said that while Mr. Bakhurst “took our points on board about context,” he “disagreed with the IPSC’s view that the coverage was unbalanced”, and Mr. Bakhurst further said that RTÉ was in “regular contact with both the Palestinian and Israeli Ambassadors, but  doesn’t give more weight to one than the other”.

Mr. Bakhurst also suggested that those who felt aggrieved by RTÉ’s coverage should make use of the RTÉ Complaints Facility – something which we highly encourage concerned members of the public to do. Of course part of the point of this whole exercise was to highlight RTE silence on important issues around the Palestine-Israel situation – alas, the complaints procedure does not expressly allow for complaints about lack of coverage.

The IPSC members alos presented Mr. Bakhurst with copies of the recent IPSC briefing documents ‘Context and collective punishment: The aftermath of recent killings in the Palestine-Israel region‘ and ‘After Gaza: Israeli impunity must end – there must be justice for Palestinians‘.

On 24th April last, some 120 Palestinians on so-called “administrative detention” (internment without trial) in Israeli prisons went on hunger-strike and were joined over the following two months by 180 others. This, the largest hunger-strike in Palestinian history and surely an event resonant with historical associations for Irish people, went unreported by Ireland’s national broadcaster RTÉ, as did the shooting to death of two unarmed Palestinian teenagers by the Israeli military while protesting the hunger strike outside Ofer prison. The station eventually reported the ending of the hunger-strike on 25th June – but only with a Reuters wire report on its website.

Similarly, following the abduction and killing of three Israeli teenagers in the Israeli-occupied West Bank, while the station did broadcast a small number of reports concerning the kidnapping, the framing of the reports was largely dominated by Israeli narratives, Palestinian voices were almost wholly absent, and little reference was made to the collective punishment of Palestinians, which included the killing of around ten people.

Finally, on 19th June an exhibition of photographs by to Breaking the Silence, an organisation of former Israeli soldiers dedicated to exposing their own past crimes against Palestinians, opened in Dublin.

This conjunction of a serious lack of coverage and context from RTE and the exhibition’s title inspired the Ireland-Palestine Solidarity Campaign to both to instigate a petition on the Change.org website centered around the appeal to RTÉ to “please break your silence on Palestine” and to produce a media briefing document entitled “Context and Collective Punishment“. RTÉ in particular was made the subject as it is the state’s public service broadcaster, for which we all pay license fees and contribute via taxes; RTÉ has a particular remit to act in the public interest.

Three weeks later, Israel launched its Protective Edge assault on Gaza which would cause almost 2,200 fatalities, over 500 of them children, and reduce the besieged enclave to rubble. During this massacre RTÉ did indeed ‘break its silence’, but in the opinion of the IPSC the quality of its reporting continued, for the most part, to be poor. It conveyed primarily Israeli state perspective and often either excluded alternative voices or offered them less time than Israelis.

A concrete example of the above is that on 17th July the IPSC, in the person of our media spokesperson Freda Hughes, was invited on to Primetime – RTÉ’s flagship current affairs program. Ms. Hughes was given only 2m19s talk time, while the Israeli spokesperson was given 4m25s (or a ratio of 34.5% : 65.5%, 2:1 in favour of the Israeli voice).  Ms. Hughes was interrupted three times in that time, while the Israeli was interrupted three times, in twice the time, and the Israeli was given the closing comment. While this is obviously specific to one incident, it is also, in our opinion, indicative of a wider privileging of Israeli voices and narratives over Palestinian ones.

Furthermore, context was rarely provided. For example explanations that Gaza is part of the Occupied Palestinian Territories; the territory remains under occupation in the eyes of international humanitarian law – hence Israel has an obligation to care for its occupants, rather than bomb them was frequently, if not always, absent from reportage. Regularly, if not always, missing too were references to illegality of siege; the blockade of Gaza is considered illegal by all reputable human rights groups, and by UN bodies including UNOCHA and the UN High Commissioner for Human Rights, and by the UN Human Rights Council’s independent fact finding mission of 2010.

Any discussion of the Palestine-Israel issue must take into account some or all of the following contextual frameworks; Israeli attacks on Palestinians have been going on since the ethnic cleansing of 1947-49. Its occupation of the West Bank and Gaza has been ongoing since 1967, as have the Israeli human rights and international law violations associated with it. Since 2000, over 9,000 Palestinians have been killed by Israeli occupation forces, including more than 1,900 children. At any given time there are an average of 5,000 Palestinian political prisoners in Israeli prisons, including around 200 children.

These are all vital issues of context which, by their routine omission, ends up leaving RTÉ’s viewers totally uninformed about the conflict and the reasons for it (at least if RTÉ reportage is their only, or chief, source of news information). Thus whenever hot conflict flares up, it appears in a vacuum, the causes being only in the recent past, and almost as a general rule in reportage Israeli violence is only ever in “retaliation” for some Palestinian affront. We have to ask, why are Palestinians never “retaliating” against decades of both specific and systematic violence (not to mention theft, humiliation, denial of rights and so on), directed against them by Israeli forces on a daily basis? Such loaded language is deeply problematic, and frames the discourse in the occupier-oppressor’s narrative.

Thus, taking into account all of the above, the IPSC considered that the text of the petition retained its relevance.

Indeed this continued relevance has been proven over the past two weeks. Since the Gaza ceasefire was announced on August 27th, we have witnessed RTÉ slip back into its relative silence. In those two weeks RTE has produced one TV report about Israel’s illegal seizure of 1000 acres of Palestinian land (2mins), and two radio reports; one interview with an English journalist in Tel Aviv about the land seizure (5mins) and one about the Foreign Affairs committee meeting on Gaza (9mins). In those two weeks, Israel has broken the ceasefire on at least 5 occasions (firing at and detaining fishermen, and firing at people in the supposedly no-longer extant buffer zone at the border),  while in the West Bank it has shot one Palestinian child and a young man in his 20s dead and caused one baby to die as a result of tear gas inhalation. There is also speculation that a Palestinian political prisoner reportedly died under torture in an Israeli jail.

Meanwhile, the UN Office for the Coordination of Humanitarian Affairs says that there”hasn’t been any change in the regime of allowing passage for people and goods” into Gaza (another ceasefire violation). Scores of Palestinians have been detained in the West Bank, and at least ten wounded. 10s of houses and other structures have been demolished. Also, the Israeli Prime Minister Netanyahu has, according to Israeli media reports, announced that he won’t be sending anyone to follow up talks in Cairo, thus basically walking Israeli out on the ceasefire.

Relatedly, Israeli settlements are not “considered illegal by many countries”, as one of the recent RTÉ reports claimed. They are, in fact, considered illegal by all countries except Israel – UN Security Council Resolution 446 declares settlements have “no legal validity – and are war crime under Article 49 of the Fourth Geneva Convention which states that it is illegal for an occupying power to “deport or transfer parts of its own civilian population into the territory it occupies”.

This is the daily routine violence and background activity of the decades-long occupation that RTÉ ignores and is silent about, but it is this vital context that is necessary for any understanding of the ‘conflict’ in general terms. Just because Palestinians aren’t dying in large numbers in the latest Israeli provocation doesn’t mean it is not news. This is the chief take away message from the petition.

Ultimately, the petition was not asking RTE to become  a “pro-Palestine” news outlet, but asking for objectivity and the correct provision of context that is absolutely vital for a public service broadcaster to provide for the public it is serving so that they can better understand the wider issues at play, and not just the immediate items of concern. In our view an informed public is necessary for an informed debate, and ultimately for justice to prevail.

When the petition was closed on 20th August, it had acquired 10,006 signatures of which some 8000 were from Ireland. Many of these signatories had contributed comments highly critical of RTÉ’s coverage – the hard copy of these comments alone consists of over 90 pages.

Video and images courtesy of iDirectMovies.