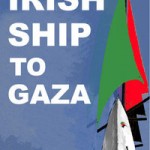 The Ireland Palestine Solidarity Campaign today announced that it had donated €1000 to the Irish Ship To Gaza Campaign. The money will help cover the costs of repairs to the MV Saoirse after the Israeli sabotage of the boat in June this year, and fuel for the when it sets sail to Gaza soon.

IPSC Chairperson Martin O’Quigley said: “Although largely untalked about in the media, the illegal siege of Gaza remains in place, and the IPSC supports such civil society efforts to break this inhumane blockade once and for all. We hope this small contribution will help achieve this goal, and we encourage others to continue to donate as well.”

The Irish vessel, the MV Saoirse, attempted to sail to Gaza in June of this year but its journey was cut short when its propellor shaft was sabotaged at port in Turkey. It has now undergone repairs and plans to set sail for Gaza soon.