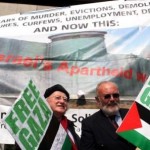 The Ireland Palestine Solidarity Campaign (IPSC) is delighted to congratulate Michael D. Higgins on his election as the ninth President of Ireland.

President Higgins has an honourable and long-standing record as a supporter of Palestinian human and political rights.

On 13th April 2008 he joined an IPSC demonstration that marched from the Central Bank in Dublin to the Dáil in remembrance of the 1948 Israeli massacre at Deir Yassin. In his speech he said:

“This demonstration is an opportunity to once again call on the State of Israel to cease its senseless, oppressive policies towards the people of Palestine and to enter a genuine dialogue for peace. It is past time that the international community discharged its debt to the Palestinian people, who have waited too long for normality and peace to reign in their lives. The international community must assist in making this happen through solidarity, support and international law.”

On June 1st 2010, during a Dáil debate concerning the attack on last year’s Freedom Flotilla – when Israeli commandos killed nine peace activists on board the Turkish ship Mavi Marmara – he said:

“The time has come for Europe and our counterparts throughout the world, including America, to act to lift the blockade. If anything comes out of the bloodshed from Monday morning it should be that Europe speaks with one voice and works together.”