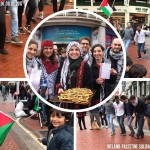 Every year on March 30, Palestinians all over the world demonstrate their commitment to resisting Israeli occupation, apartheid and colonialism – and this year was no different, with a hugely successful event held on Dublin’s Grafton Street.

Members of the public on one of Dublin’s busiest thoroughfares were treated to examples of traditional Palestinian culture – clothing, music, dabke dancing, poetry and, of course, food. One observer said that it “was great to see these wonderful young people practicing their traditional dancing for everyone’s delight – and really enjoying themselves at the same time too!”Members of the public also stepped up and took part in the dancing.

Amid the music, dabke and whirling keffiyehs, samples of Palestinian za’atar bread (a delicious mix of thyme, sesame seeds and marjoram) were given to people, and hundred of leaflets explaining the importance of Land Day were distributed. The leaflets also featured an example of beautiful Palestinian poetry, reproducing the poem ‘Here We Shall Stay’ by Tawfiq Ziad (1932-1994). You can read the leaflet we gave out to people here.

To close the event, IPSC Chairperson Fain Al Tamimi spoke briefly about Land Day and what is means to Palestinians, and thanked everyone who came along and took part, especially the five lead dancers. What is Palestinian Land Day?

The original Palestinian Land Day in 1976 saw Israeli military forces shoot and kill six Palestinian citizens of Israel, who were among thousands protesting the Israeli government’s expropriation of 2,000 hectares of land around the Arab villages of Araba and Sakhnin as a part of a plan to, in terminology of the Israeli state, “Judaise the Galilee” region, which has a majority of Palestinian residents.

It marked the first act of collective civil disobedience by Palestinian citizens of Israel against the racist colonisation and dispossession of the Palestinians of their lands and rights since the creation of the state in 1948, and simultaneously signalled the failure of Israel to subjugate those Palestinians who managed to remain in their homeland, after over 750,000 of them were ethnically cleansed during the 1947-1949 Nakba.

Today, we continue to celebrate and stand in solidarity with Palestinian resistance to Israel’s ongoing land expropriation, colonisation, occupation and apartheid. Four decades after the first Land Day demonstrations, Israel continues its theft of Palestinian land. Israel continues to expand its illegal settlements in the occupied Palestinian territories, forcing Palestinians from their land. Palestinians inside Israel also face dispossession, displacement and discrimination where they continue to be subjected to racist policies that aim to deprive them of their lands and rights.

As supporters of the Palestinian struggle for freedom, justice and equality, Ireland Palestine Solidarity Campaign (IPSC), invites people of conscience across the world to join us in marking land day by supporting the global Palestinian-led Boycott, Divestment & Sanction (BDS) campaign against Israel, as an effective form of solidarity with the Palestinian struggle and working together to intensify our collective efforts to hold Israel accountable for its crimes against the Palestinian people.